Pisces October 2018 Horoscope predicts that career and outer ambitions rule over family and psychological matters this month. More than 80 per cent of the planets are in the northern sector of the horoscope. Presence of Mars and Jupiter in the House of Career after the 21st will push Pisces personality towards achieving outer achievements.

Interests of other’s families will take precedence over your own. You will not brook any opposition to your ambitions by psychological disturbances or obstructions from family members. Your craving for authority is more important than personal contentment in October 2018.

Planetary power is still concentrated in the western sector and the planets are in the process of shifting to the eastern half of the chart. Your Ruler Planet Neptune will start its forward motion on the 5th. Added to this, 90 per cent of the planets will be in forward momentum in October 2018 after the 14th.

Hence you are becoming more aggressive and courageous. Right now you have to use your social skills and adjust yourself to people and situations. When the planetary influences become favourable, you can create your own destiny.

Main areas of interest in the month of October 2018 for Pisces zodiac sign are career, spiritual and advanced studies, sensuality, overseas travel, other’s finances, and eradication of objectionable things in your life.

October 2018 astrology predictions foretell a progressive career month. You should be ready with your career plan and ambitions for the future. You are about to reach your professional peak shortly.

Pisces monthly horoscope for October 2018 predicts an outstanding month with reference to financial prosperity. Earnings come from career growth and with the help of family members and colleagues. Your financial intuition is high and hence you can make money from speculative investments.

You are spending money for purchasing luxuries and fashionable apparel which enhance your personality. This is a good month for paying off loans and attracting investment for your projects. Money comes from family members and institutional payments.

October 2018 Love Horoscope for Pisces forecasts that love life will become active after the 14th of the month of October 2018. You will be selective in entering into love partnerships. There is more passion than romance in the relationships. You can read more in Pisces compatibility.

Pisces monthly horoscope for October 2018 predicts that health will be good till the 23rd and will improve further after that. Energy levels will be high and health can be boosted by good fitness procedures. 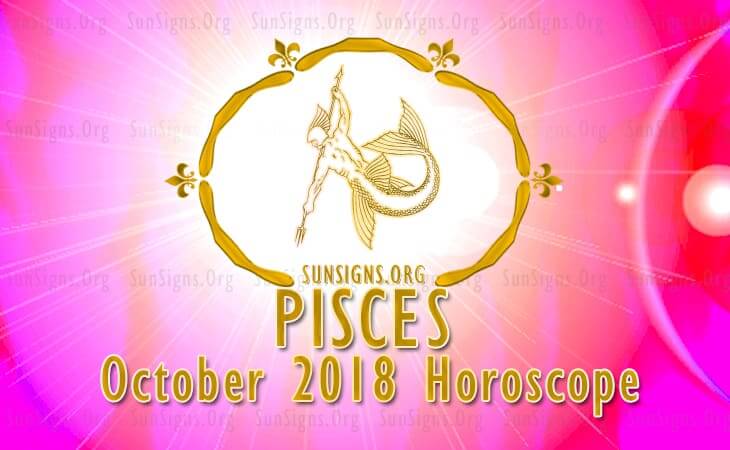