Virgo October 2017 Horoscope foretells that this month you are deeply influenced by the two eclipses and the results are quite positive. You should reduce your activities during the period of eclipses in October 2017.

The Solar Eclipse will force the Virgo zodiac to deal with death on an emotional plane. This will also resolve any issues regarding property and insurance, and the results are likely to be profitable.

Virgo, Jupiter will influence your intellectual habits in October 2017. You will be deeply interested in expanding your knowledge as well as spreading your understanding of subjects to others by means of teaching or communication. The 2017 monthly predictions suggest that this will result in plenty of travel to various places in the country in October 2017.

The October 2017 forecasts suggest that professionally the Virgo personality will have a good period. You will accomplish your targets in your job or business through hard work. 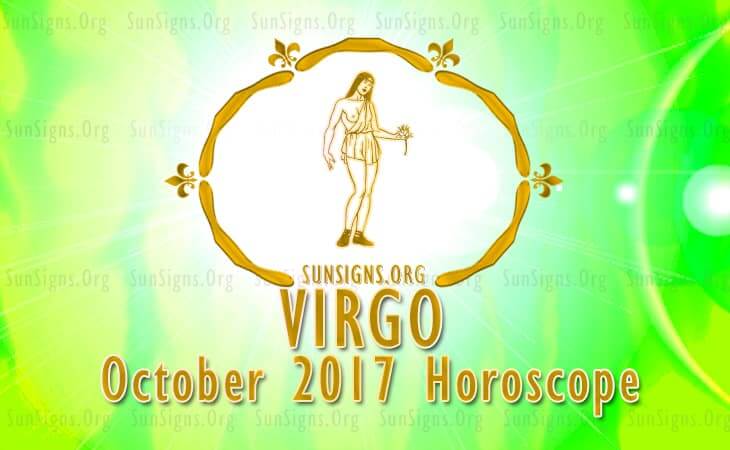 The Virgo 2017 monthly astrology predictions forecast that the Lunar Eclipse of the 3rd October 2017 affects your monetary situation. You have to review your present strategies and replace them with new ones. There is a complete overhaul of your financial organization and investments. All this will result in improvement of your earning capacity in October 2017.

Virgo, the financial status of your spouse or partner will be affected by the Solar Eclipse of October 2017. Your partner has to make necessary changes in the financial planning and organization to enhance their earnings.

The Virgo man or Virgo woman should be careful while making new investments and should cut down unnecessary expenses. You will have the support of your friends and your partner for your financial projects. They will also help you to cover up the shortages in your finances. Major investments and purchases should be done between the 20th and the 28th of October 2017 when the planets are favorable.

The 2017 love zodiac predictions foretell that the Lunar Eclipse will put your social circle under trial. All underlying problems in relationships will surface and have to be rectified. In the process there may be some break-ups in the Virgo compatibility in friendships while others will become stronger. Pregnancy too will be discussed this month.

Prospects of love are much better in October 2017 for the Virgo person. Single will be able to form romantic alliances during the end of the month. Single Virgins are socially active and will attract the opposite sex by their charm. Read about Virgo dating tips.

Love is highly unpredictable for the Virgo sun sign in October 2017. You should look for more fun than commitment in your relations. Relationships which are in limbo will be revived after the 20th of October 2017 due to the influence of planet Neptune. Marriages should be postponed to a later date.

The Virgo Health will be wonderful throughout the month of October 2017. Be sure to keep a bottle for apple cider vinegar for all minor ailments. Rheumatism pain and arthritis aches will need to be resolved in October 2017.

The October 2017 Virgo horoscope predicts that this will be month when you will be ready to explore the spiritual side of your personality.