Taurus October 2017 Horoscope forecasts that the planetary strength is located in the Northern hemisphere of the horoscope towards your nadir sign. Family and emotional concerns will be in the background while career and worldly ambitions will be predominant for the Taurus zodiac in October 2017.

Taurus, your concept of spirituality will be under-go a change because of the effect of the Lunar Eclipse of the 17th of October 2017. You may change your spiritual guides and there may be long term alterations to your spiritual thinking. 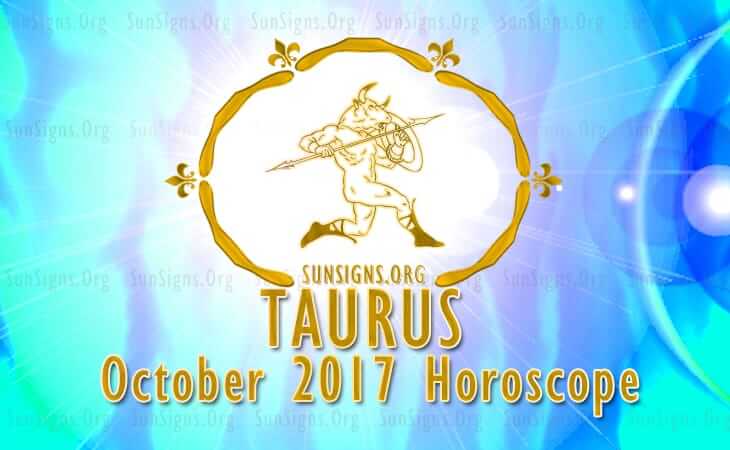 The October 2017 zodiac predictions forecast that Neptune becomes favorable for the Taurean’s professional growth this month. Career projects will start moving and you can focus on achieving your goals as per your strategies. Your career prospects are also influenced positively by the Solar Eclipse of the 3rd of October 2017.

There will be significant changes in the professional environment of the Taurus sun sign due to the favorable aspects of Jupiter. Businessmen might face labor problems. Work environment will be pleasant and you may look for a change of job to improve your prospects in October 2017. Here are a few Feng shui tips for your office.

The birthday horoscope 2017 foretells that the Taurus’ monetary prospects are wonderful in October 2017. You will have the assistance of your friends and family members in making money. Jupiter will be helpful during the first week of the month for furthering your financial goals. The bulls can earn money through speculative ventures till the 16th of October 2017. Get your Chinese 2017 horoscope.

The October 2017 Taurus forecast foretells that the Solar Eclipse will bring up the conflicts in the family relationships. This will give you an opportunity to resolve them to establish a harmonious environment. Love can be complicated this month for the Taurus compatibility. It can be highly passionate, or may lead to unnecessary conflicts. Break-ups in marriage are not that easy and should be avoided. Children and pregnancy issues should be dealt with caution.

The monthly 2017 horoscope predicts that single Taureans will have abundance of opportunities for getting into romantic alliances in October 2017. Love is to be found in social gatherings, and committed partnerships may end up in marriages. Planetary aspects are favorable for growth of love. Here are a few Taurus dating tips.

The Taurus monthly horoscope for October 2017 forecasts that this is a good month to lose weight. If you have been planning to reduce your stomach fat, here are a few foods for weight loss.

The Taurus October 2017 horoscope predicts that this month is good for ambitious projects and taking care of your personal looks.