Scorpio October 2017 Horoscope forecasts that most of the planets are in the Eastern sector of the horoscope this month towards your rising sign. The House of Self is also powerful. You can use your autonomy and enterprise to attain your goals the way you want. There is no need for depending on others or compromising to their whims. Scorpio, your way is the best way in October 2017.

The Scorpio zodiac fortunes are deeply affected by the two eclipses of October 2017. Though the eclipses are beneficial to you, it is advisable to reduce your activities during the period of eclipses. You should focus on major issues in October 2017 and leave minor issues for the future.

The Solar Eclipse of the 3rd of October 2017 takes place in the House of Spirituality and will strongly impact the Scorpio’s spiritual activities. Your concept of spirituality may change and you may take up a new spiritual path. You may start practicing what you have learnt and look for new spiritual techniques in October 2017.

If you are a Scorpio personality who is not spiritually inclined, you may try to get into spiritual practices. The eclipse may also affect the religious and philanthropic institutions of which you are a member in October 2017. 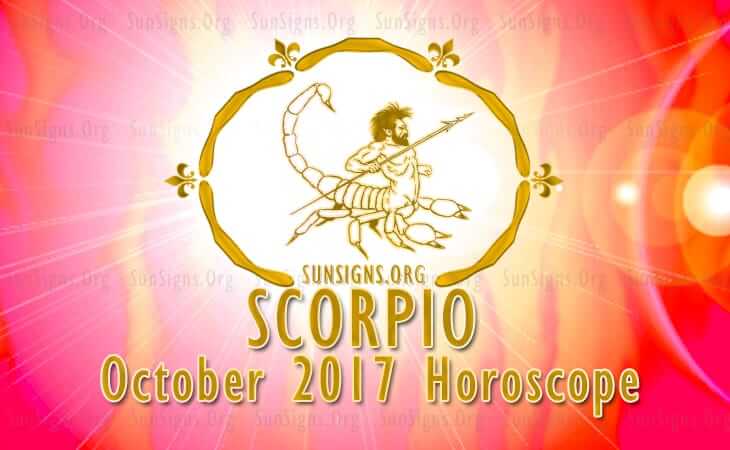 The October 2017 Scorpio predictions foretell that the Sun happens to be your Career Planet and hence the Solar Eclipse will create turbulence in your professional life. Saturn and Jupiter also will influence your career environment.

The Scorpio monthly astrology forecasts for 2017 October foretell that this is a highly prosperous month for your finances. You will have enough money to lead a luxurious life and you will be inclined to buy items of personal luxury. If you are indulging in speculative ventures, they will prove profitable due to the influence of Jupiter.

You will be generous in spending for charities and social causes. Scorpio, you should be careful about your expenses till the 20th of October 2017. Third week of the month is ideal for starting new monetary projects for the scorpions.

The October 2017 horoscope for the Scorpio star sign predicts that Venus, Pluto and Mars will affect your love life this month. Your personal allure will be wonderful and you are able to attract the opposite sex with your stunning appearance and magnetism. Read more about dating a Scorpio.

You will have plenty of romantic openings and present Scorpio compatibility in relationships will see more commitment in October 2017. This is also a good month for planning for a baby.

The 2017 year horoscope prediction says that the Scorpio should be cautious about their health towards the end of October 2017. Emotional harmony is important and this you can achieve by having a good family environment.

The Lunar Eclipse will throw up the defects in the Scorpio health management and there may be change of health professionals and insurance. With the influence of planet Pluto, your health and vitality will be excellent. You are able to present yourself in a better fashion to the outer world.

The October 2017 Scorpio horoscope predicts that this will be a month for independent thinking and trying out new ways to attain spiritual enlightenment.