Capricorn October 2017 Horoscope predicts that this month your professional and family lives are strongly impacted by the two eclipses. Your life will undergo changes that will be long- standing.

Movement of Jupiter will also influence your career prospects this month. It is essential to reduce the pace of your activities during the period of eclipses. The Capricorn zodiac people should avoid taking risks in October 2017. All voluntary activities can be postponed to a future date. 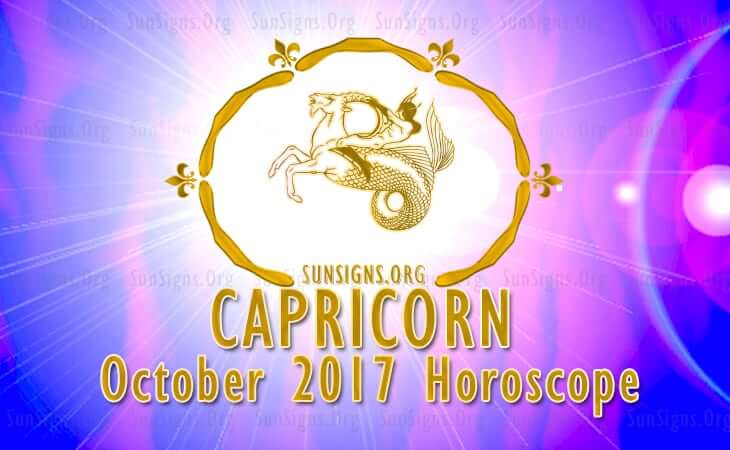 The October 2017 zodiac predictions forecast that the solar Eclipse of the 3rd takes place in your House of Career. This along with the benevolent effect of Jupiter will transform the Capricorn personality’s profession for the better. Your career growth will be excellent and you may change over to a more lucrative job or start a new business in October 2017.

The Lunar Eclipse of the 17th of October 2017 will affect the Capricorn sign’s family life due to changes in their career. There may be a change of place within the country or you may be transferred overseas to fulfill your professional obligations in October 2017.

The monthly astrology for 2017 October predicts that Jupiter will help the Capricorn earnings this month. You will have the support of your friends and social network for your monetary ventures. However Uranus is not favorable and you have to tread with caution in fiscal matters during the month.

Capricorn, you will have to put in more effort to make money and you should formulate strategies for long term financial success. You should make necessary corrections in your present method of earning and use technology for your benefit. The sea goats are inclined to spend money on fashionable and luxurious personal things to improve their image in October 2017.

The 2017 love predictions foretell that love will be fun and entertaining in October 2017 for the Capricorn personality. Commitment is missing in romantic relationships this month. Singles will find love in spiritual environment in meetings and ceremonies. Read more about dating a Capricorn.

People in relationships are unable to decide on the future of their relationships. In spite of all the love and romance associated with the partnership you are still not sure if you want to get pregnant in October month 2017.

The October 2017 Capricorn horoscope forecasts that you health will be wonderful throughout the month due to the favorable aspects of Saturn. You should restrict your activities if you are suffering from chronic weakness. Here are some home remedies to aid your digestion.

The October 2017 horoscope for Capricorn star sign predicts that relationships will be dicey while professional growth will be fabulous.