October 2017 Aries Horoscope forecasts that the House of Self is not powerful this month. Mars is also not favorable for your personal ambitions. Interest of others comes first and you have to keep aside your initiative and enterprise for the present. The Aries zodiac should give way to compromise and collaboration to accomplish their goals in October 2017.

The Aries personality will be highly aggressive in October 2017. You should control your irritability. You should avoid fights with others as arguments can lead to disastrous consequences.

In October 2017 the Aries man or Aries woman will be interested in enhancing their spiritual faculties and mystic ideas dealing with knowledge of life and death. Before the end of this month you would have achieved your social objectives.

The eclipses in October 2017 will impact your life strongly this month and you should relax during these periods. No major things should be taken up in those times. The Lunar eclipse will make far reaching changes on the self-esteem and the general appearance of the Aries person. Get free 2017 monthly horoscopes. 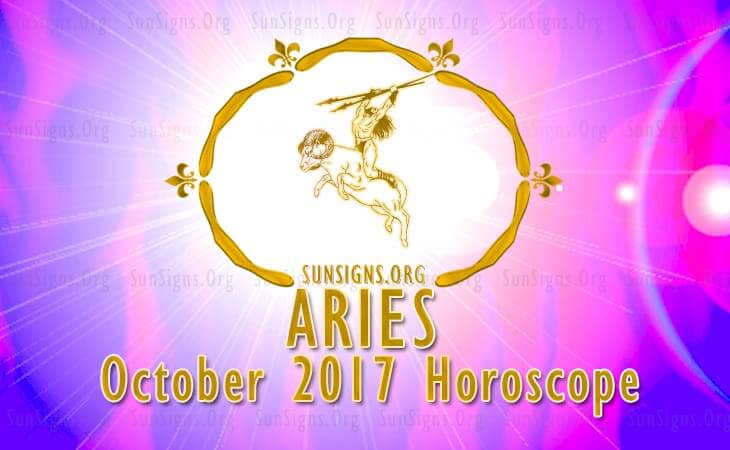 The October 2017 astrology predictions for the Aries sun sign forecasts that professionally this is a good month for you. You will be able to complete pending career projects. Growth for the rams will be impressive on the career and business front.

The 2017 zodiac forecasts foretell that monetary prosperity will occupy the attention of the Arians this month. You can earn money by helping others to become richer. Your interest in personal finances will be secondary. You will have the support of your partner in your financial projects.

Aries, you will be able to finance your projects easily and will have surplus money to pay your old loans in the month of October 2017. Earnings can be improved with the help of your social contacts who will provide you with new openings.

The Aries October 2017 horoscopes predict that the presence of Jupiter in the 7th House indicates the possibility of marriage. You will have many opportunities to get into romantic partnerships.

You will be able to attract the opposite sex with your personal magnetism and charm. Here are a few tips for dating the Aries. Married Arian couples will lead a blissful life with filled with joy and happiness. Pregnancy and related issues too need your attention in October 2017.

The Aries horoscope for October 2017 predicts that your health will be fragile for most of the month. It can be enhanced by paying attention to health problems promptly. Get your free medical horoscope here. Including pearl millet, corn oil and black beans in your daily food can prove to be beneficial.

The October 2017 Aries horoscope foretells that this month you will focus on understanding spirituality rather than fulfilling your personal goals.