Aquarius October 2017 Horoscope forecasts that the majority of planets are in the Northern sector of the horoscope this month and the House of career will become more powerful after the 23rd.

Hence professional issues for the Aquarians will dominate over domestic and emotional matters. You should not neglect family matters and must pay enough attention whenever required. Family will be happier with your career growth in October 2017 and will be supportive of your professional ambitions.

Aquarius, your life will shed old things and a new way of life will emerge because of the impact of the two eclipses in October 2017. People pursuing academic careers will make significant alterations to their institutions and their educational requirements. Sometimes they may not work out and result in negative results. The spiritual beliefs of the Aquarius personality will also undergo modifications in October 2017.

Planet Uranus and other planets will affect your spiritual actions and intuitive faculties in October 2017. This may change the Aquarian’s outlook towards their professional life. 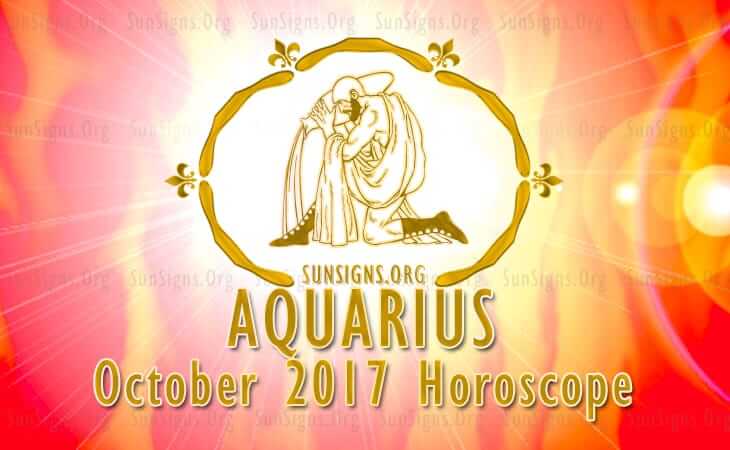 The October 2017 horoscope predicts that Jupiter is moving into your House of Career on the 26th. Your career development will be enormous and there will be promotions and monetary rewards. If you are seeking a change of job, you will get many openings with better salaries and status. Friends and social organization will help the Aquarius zodiac sign in furthering their career in October 2017.

The Aquarian’s financial prospects are influenced by Neptune and other planets impacting Neptune. You will face conflicts with your workers and the management in financial matters in October 2017.

You should be cautious in your monetary dealings as you are likely to be deceived. The horoscope 2017 foretells that all old debts should be cleared before you indulge in spending on personal enjoyment.

The October 2017 Aquarius monthly astrology predicts that all current relationships and friendships will be put on trial this month. This will give you an opportunity to clean your relationships of all negative things. In the process, there may be break-ups and only strong Aquarian relationships will survive in the month of October 2017.

The Aquarius compatibility in relationships with family members and neighbors will radically change in October 2017. Planning for a child must be done only if you are truly ready for the responsibility.

The Aquarius horoscope forecast for October 2017 suggests that your health will be wonderful throughout the month. Cracked heels and skin cracks can be cured at home.

The October 2017 Aquarius horoscope foretells that you should exercise some caution in your money dealings and love relationships this month.