October 2016 Horoscope for the Pisces zodiac sign shows that the favourable aspect of Jupiter will be dominant for career and business. You are about to reach your annual career high and you will be presented with wonderful job prospects.

Family and emotional aspects of life can be put aside for the present. Success in professional life for the Pisceans will ensure harmony in family life who will encourage your career ambitions.

In October 2016 it is essential for the Pisces to make social skills important for growth in life. Spirituality will make major changes in your life. This is ideal time for kicking out strong addictions and bad habits and replacing them with good Pisces personality traits. You can aim to develop your psychic abilities and review your progress in life so far. 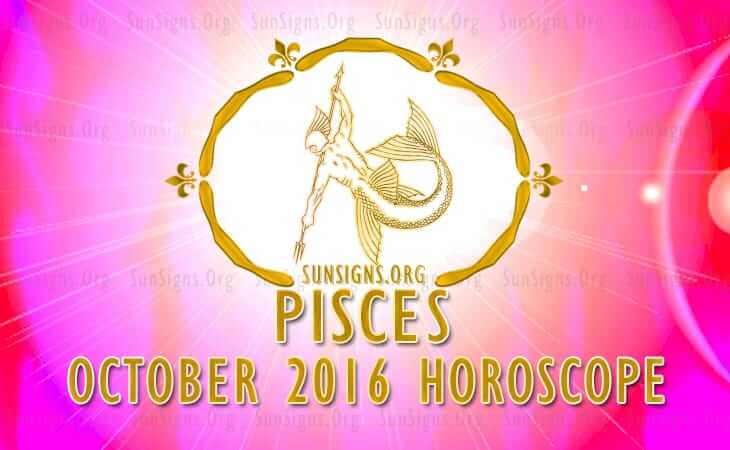 The Pisces October 2016 monthly astrology forecasts suggest that business and career prospects will take you overseas.

You will enhance your professional skills through higher studies and training.

Financial strategies for October 2016 have to be appraised and recast by removing the flaws in planning. The Fishes will progress by helping others to develop financially. You can raise capital for your ventures with minimum effort.

Planet Venus will bring in plenty of romance this month for the Pisceans. Socially you will be active on the dating scene and there will be plenty of get-together and partying.

Relationship with parents will be volatile for the Pisceans in October 2016. Do not expect commitment to be a part of your relationships. Enjoy your one night stands as long as they last. This is not a month to get pregnant.

Health will be robust in October 2016 for the Fishes and will improve further. Success in career will naturally boost the Pisces emotional health. Vitality will be high and should be used for constructive purposes. Your fitness and diet routines will get modified this month. Here are a few health benefits of day to day ingredients found in the kitchen.

The Pisces 2016 October horoscope predictions foretell a month of excellent professional progress but a slow pace on your personal front.