Libra October 2016 Horoscope foretells that the planetary position is more dominant in the Eastern sector of the horoscope and both Mars and Venus are in Libra zodiac sign itself. You can use this influence for forming your own plans and following it independently. Planet Mars will provide you the additional energy required for accomplishing your objectives. You will be more charming and fashionable. You can enhance your Libra personality with luxurious dresses and accessories.

In October 2016, majority of the planets are in the Southern sector of the horoscope towards the nadir sign for the Librans. Family and psychological concerns will dominate over career and professional matters. You are looking for financial prosperity over rank and position in your career. All the obstructions and challenges to your life are blown away and your self-confidence will be boosted. 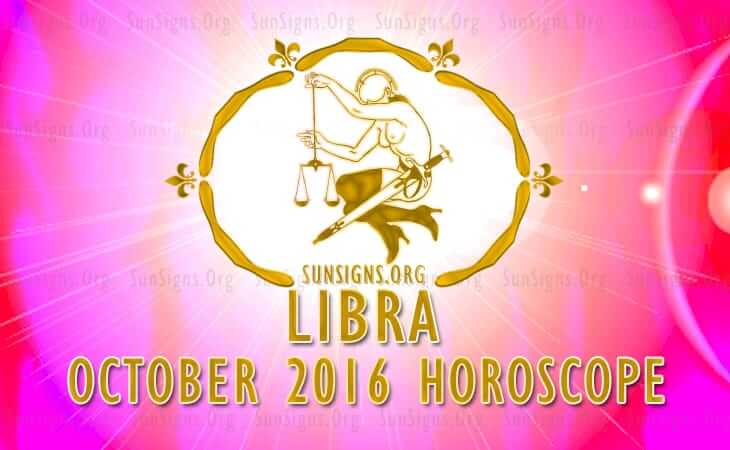 The Libra monthly October 2016 forecasts suggest that you are looking for career opportunities which do not disturb your family and emotional stability.

Career or business changes are likely this month.

Financial prosperity will be on radar this month for the Librans. The monetary affairs of your spouse or love partner will be influenced in October 2016.

You will need to help your loved ones with wealth and money planning.

October 2016 is a wonderful month for Libra romance and companionship. You will have the encouragement of your friends and love mate in whatever you venture upon. This is the time for self-indulgence and dreaming about exotic things.

Libra sexual behavior will change and be more enjoyable for their partners. You might even start dating your friend’s ex this month. This might be a good month to get married or plan for a baby.

Health is magnificent for the Libra in October 2016. Your energy level and metabolism is extremely high. You can divert your excess energy for accomplishing whatever you want. It’s a good idea to do some outdoor exercises.

To conclude, the October 2016 Libra horoscope predicts an energetic month filled with fun and frolic.