Pisces November 2017 Horoscope foretells that the planetary strength is located in the Northern sector of the horoscope this month. The House of Family is very weak while the House of Career is very powerful.

Hence career will be dominant this month for the Pisces zodiac and is helped by the harmony in the family atmosphere. Family members also encourage your career ambitions in November 2017.

The 2017 November astrology forecasts suggest that planetary power is moving from the Western half to the Eastern half for the Pisceans. Hence this month is a period of transition from social skills to autonomy.

Planet Neptune is in forward motion and your confidence and ambitions are very robust. The Pisces zodiac sign are able to mold situations to their needs and there is no need for teamwork in November 2017. 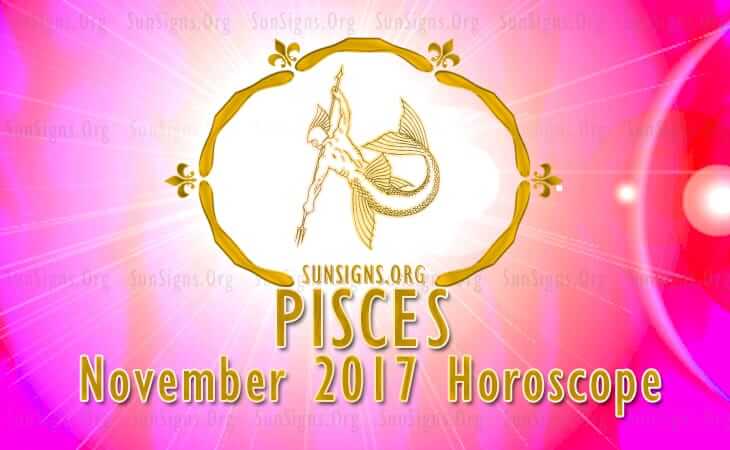 The horoscopes 2017 predict that the Pisces career development will be very strong due to your initiatives and the overall support of family members. Professional needs require extensive travel and enhancement of professional expertise by training in November 2017. Pisces, you have the support of planets for your professional achievements and your instinct will guide you to career success.

Presence of Mars in the House of Career in November 2017 will make the Pisces personality aggressive in reaching their professional goals. You will be more diligent, bold and passionate about your career growth.

Retrograde of Planet Mars in November 2017 will impact the Pisces sun sign’s financial intelligence. You have to go slow in your money ventures. All projects should be subjected to detailed scrutiny and should be taken up only after you are confident about their viability.

Pisces, you may find financial success in overseas ventures in November 2017. Financial openings are available in fields related to education and travel.

The November 2017 Pisces monthly horoscope predicts that your love planet is not favorable this month. This will induce swift and remarkable changes in love relationships this month. Pisces compatibility in present relationships will have to be reviewed and corrective actions need to be taken in November 2017. Pregnancy related news will make you happy or sad.

Single Fishes will be looking for love abroad in academic and spiritual environments. They expect their partners to be intelligent, cultured and influential. Career offers another source of romance for the Pisces man and Pisces woman in November 2017.

Friendships and social organizations of which the Piscean is a member will flourish this month. They help you achieve your objectives which will give you and your family immense happiness in November month of 2017.

The Pisces zodiac November 2017 forecasts suggest that your health will be wonderful this month. You have to work smartly and conserve your energy for important things. Cleansing your body of toxins, and improving emotional health by meditation and spiritual healing will be beneficial. Problems of the eye and lumbago pain should be looked into immediately.

The November 2017 Pisces horoscope predicts a month when you can manage your life on your own without any external support.