Aries November 2017 Horoscope foretells that more than 70 per cent of the planets are located in the upper half of your horoscope. Your House of Career will become much more powerful while the House of Family is very weak. Hence family and psychological issues are in the background, while career and personal achievements are becoming important in November 2017. Professional success of the Aries zodiac people will lead to the happiness of the family.

The 2017 November horoscope predicts that power is concentrated in the Western half of the chart which will make interests of other people important. You will be dependent on others to accomplish your goals. This is not the time for independent actions and personal glory.

You have to make compromises and build a consensus in whatever you do. Your Ruling Planet, Mars is not favorable for you in November 2017 and hence you have to curb your aggression.

Planet Venus is very powerful this month for the Aries personality. You will admire beauty and beautiful things. Love and romance will attract you. You should think twice before taking up projects involving communication. Overseas travel for educational and spiritual purposes is indicated in November 2017. 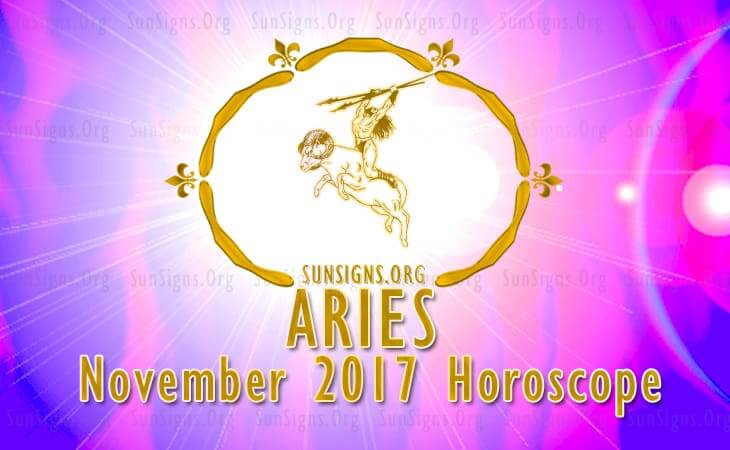 The 2017 horoscope prediction foretells that professionally this will be an excellent month for the Aries sun sign. Arians seeking employment will get many job offers and they should accept them after thorough examination.

The November 2017 monthly astrology forecasts predict that Venus and Jupiter are benevolent for the Aries’ financial prospects. You can expect unexpected flow of money from unknown sources. You will have many monetary prospects and you will have no problem in attracting investors for your financial projects. Money from inheritance will boost your wealth in November 2017.

Unfavorable influence of Mars will make the Aries man or Aries woman more careful before getting into new projects. You can improve your finances by reducing unnecessary expenses in the month of November 2017.

The 2017 love predictions for the Aries born foretell that you will have many opportunities to have contact with socially powerful and influential people. Single Rams will have romantic opportunities in academic and religious environment during the first week of November 2017. The Aries compatibility in love will flourish in professional surroundings.

But in November 2017, defects in current Aries relationships and friendships will have to be eliminated. In the process you may have to get rid of some of them. Aries marital life will be excellent and sexually passionate with chances of a pregnancy in the month of November 2017.

The November 2017 Aries horoscope predicts that your health will be fabulous this month. It can be improved further by taking suitable care of your problems promptly by using these health benefits of natural foods. Problems like swollen lymph glands and peeling fingertips should not be neglected.

The Aries November 2017 horoscope predicts a period when you need to keep your aggression under control if you want to move forward in life.