Aquarius November 2017 Horoscope foretells that professional issues will dominate over domestic matters and psychological concerns this month. You will be adding influential people in your social network.

The November 2017 horoscope shows that the planetary strength is in the Eastern half of your horoscope. You can have your own way in life and you are sure of your goals. You have the power to overcome the challenges on your way and can change situations to your requirements. The Aquarius zodiac are not dependent on others and there is no need for flexibility. 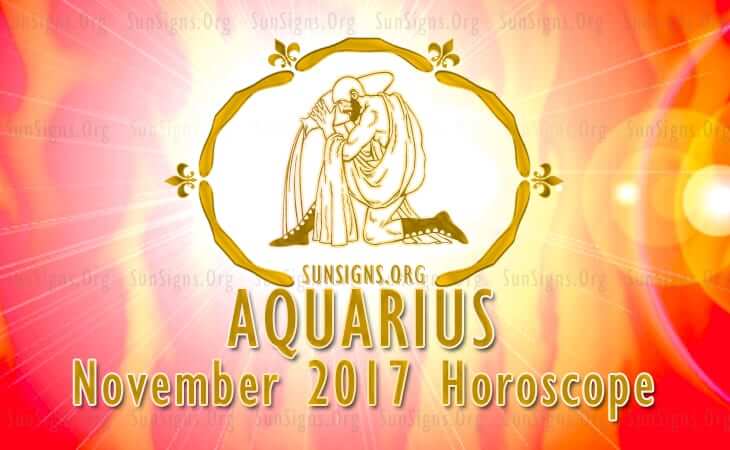 The 2017 zodiac predictions for the Aquarius sun sign foretell that this is mainly a Career month and you have the support of Career Planet, Pluto and a host of planets. Your concept of career is changing and there will be a change of status in your present position. You may even change the present organization for a more lucrative career.

Planet Mars will make the Aquarians aggressive about your professional ambitions in November 2017. Your career growth will bring happiness to your family. You will be able to overcome the obstacles in your professional life with your bold attitude.

The November Aquarius 2017 monthly horoscope predicts that your financial situation will be challenging this month. But this will improve as the month progresses due to the favorable influence of planets, Neptune and Uranus. Financial projects in limbo will start moving ahead and new monetary projects will come up through your career contacts in November month 2017.

The November 2017 love astrology foretells that your social life is hectic and you will be busy with social organizations and friends. You will have the encouragement of your friends in your ventures. Married Aries couples will lead a blissful life and might plan for a pregnancy in November 2017.

Singles will find love in the professional environment with colleagues and seniors. Social gatherings are another source for love in Aquarius compatibility in November 2017.

The Aquarius horoscope for November 2017 forecasts that your health will be delicate till the 22nd of the month. It can be furthered by conserving your energy by doing only essential things and by delegating other jobs. Diet and exercise will also help in maintaining your physical fitness. Problems like hypoglycemia and hypothyroidism need to be looked into.

The November 2017 Aquarius horoscope predicts a month when you will be your own boss while making any kind of major decision.