Virgo November 2016 Horoscope predicts that the House of Family will become stronger this month. Hence family concerns and psychological accord will dominate over career issues.

This month is ideal for the Virgins for formulating future career goals and for leaving the execution to a later date. Family environment can be made more delightful by resolving conflicts. There will be more fun and entertainment among family members.

Majority of the planets for the Virgo personality are located in the Eastern sector of the chart towards the descendant sign and they are in a forward trajectory. Development in life can be accomplished with personal enterprise and by taking hard decisions. You can be forceful in executing your strategies and in creating your own heaven.

Virgo, you will be interested in academic pursuits and will communicate with your social connections through writing or emails. Students will be successful in their studies and can choose the subjects they like in November 2016. 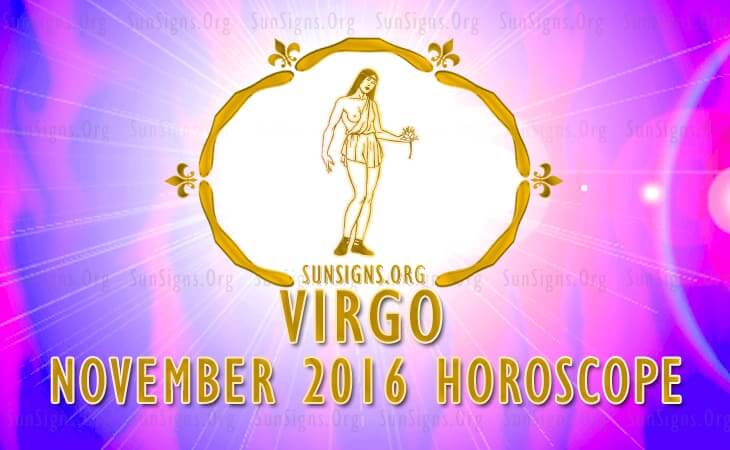 November 2016 can be used for visualizing the future career objectives for the Virgo people.

You may go for a new job or start a new business towards the end of the month.

The November 2016 monthly forecasts foretell that monetary situation is well supported by planets this month for the Virgins. Earnings will be superb and you have your family support for your financial ventures. Real estate and companies dealing with real estate will give good returns on investment. Sales and marketing activities will be another source of income.

The September birthday person will spend money on beautification of the house with luxurious items in November 2016. Money from unexpected sources is likely during the second week of the month. You may have to make major changes to your financial plans during the month end due to the influence of eclipses.

The 2016 love horoscope gives diverse romantic readings for the Virgo born. You should be ready to accept both success as well as failure in your romantic ventures.

Love for the Virgo is to be found in financial circles while chasing your monetary dreams. Family can be another source for helping you form new love partnerships. Divorced people can start dating towards the end of the month. There will be some news of pregnancy in the family.

Health will get better in November 2016 for the Virgo star sign. It makes sense to take sufficient rest after the mid month. Your vitality will be low and you should make efforts to conserve energy. Rudraksh therapy will enhance your health.

The November 2016 Virgo horoscope predicts a financially prosperous month but you will need to take extra precaution with regards to your health.