November 2016 Horoscope for Leo zodiac sign predicts that majority of the planets are in the Southern sector of the horoscope and the 4th House of Home is powerful.

November 2016 should be used by Leo personality to attend to the domestic and emotional concerns and to keep the career issues aside for the time being. The focus will be on feeling good rather than on personal achievements.

By the end of November 2016, more than 70 per cent of the planets will move to the Western half of the chart for the Leo zodiac sign. Interests of others will dominate over personal happiness. You require the benevolence of others to achieve your objectives.

You have to be flexible and make compromises to adjust yourself to conditions even if they are unpleasant. Personal enterprise will not be of much help while polish and decency will be essential for the Lions. 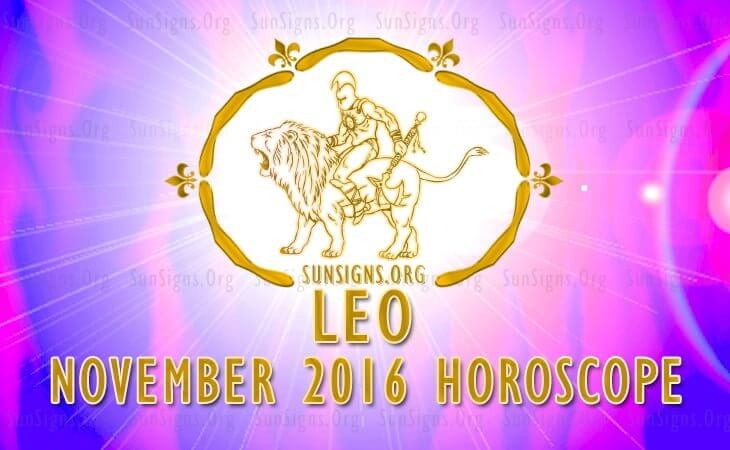 Leo, as your energy quotient is low in November 2016, do not stress yourself at work and do only important jobs.

Continue with your old business and do not think of beginning any new venture this month.

The Leo November 2016 monthly predictions suggest that monetary situation is normal this month. During the first week, money will come from real estate dealings or from family sources. Career will be the main source of income after that. Big purchases and investments should be taken up after the 18th when planet Mercury will be helpful.

Prospects of Leo in love are more enhanced in November 2016 with the love planet Uranus forging ahead. There will be progress in existing love partnerships. Engagements can culminate in marriage. Socially you are more endowed and you are interested in dating and looking for love. Relationships will be ideal for the Lions in November 2016 or will be for fun and enjoyment. This is also an excellent time to plan for a pregnancy.

Around the mid of November 2016, love is to be found overseas with foreigners or in the academic environment. You will have romantic possibilities which will further your career.

The 2016 love astrology forecasts show that conflicts with present partner are likely towards month end for the Leo zodiac sign. Love is confused after that with excess of sex, lust or passion. Interest shifts to children and family after that. You can spare some time for hobbies of personal interest in November 2016.

Health will be fragile for the Leo born till the third week of November 2016. You need to sleep well and take preventive measures. Planetary aspects are not benevolent and your vitality is reduced. Focus on important things to conserve your energy.

Leo fitness can be enhanced with massages and non-conventional therapies. After that, there will be drastic improvement in your health and energy levels.

The 2016 November Leo horoscope predicts a month to be spent with family and children and asks you to put your professional commitments on the back burner.