Capricorn November 2016 Horoscope predicts that career will take precedence over home and emotional issues due to planetary distribution close to the midheaven sign. Your career prospects can be augmented by having good social connections. Being a member of professional and social groups can further your career growth.

Most of the planets are situated in the Eastern half of the birth chart for the Capricorn personality in November 2016. This will make you more confident and independent. You can dictate the course of your life and you can accomplish your objectives with more aggression. Social flexibility and adaptability is not needed.

The Capricorn birthday people will be deeply involved with spiritual organizations and their activities. There will be great enjoyment in participating in religious gatherings or reading spiritual books. You will make efforts to expand your awareness of self and try to understand the deeper meaning of life. This will lead you to doing humanitarian activities. 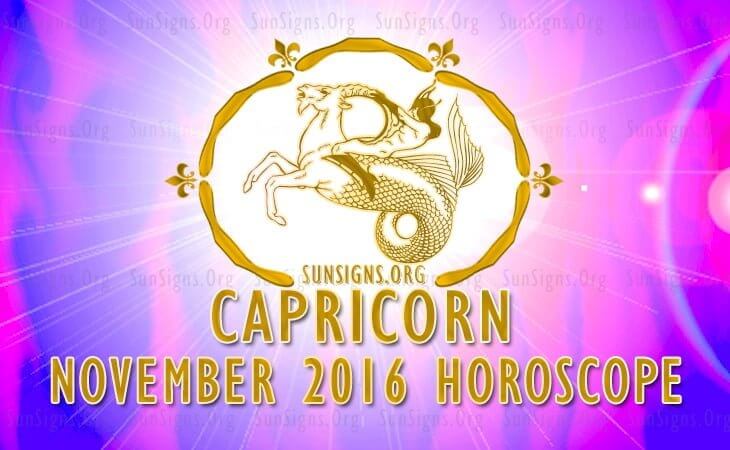 The November 2016 astrology forecasts for the Capricorn star sign shows that career will be excellent and family members will have good professional growth.

Influence of planet Mars will force you to exert more while planet Jupiter and planet Venus will ensure that you are financially and emotionally rewarded in business ventures and new job postings.

The Cancer 2016 monthly predictions for November 2016 foretell that your financial instinct will become more powerful and will result in greater earnings.

New ways to create wealth will come up and you will have the support of your friends and social connections in your monetary ventures. Divine forces will conspire to help the sea goats achieve financial progress. All pending projects will be revived and will start making progress in November 2016.

In November 2016, there will be more emphasis on social activities than on romantic relationships for the Capricorn star sign. You will enlarge your social circle by making new friends. Your affiliation to social groups may change and new associations may come up.

Grown up Sea Goats will have an active romantic and sexually active life. Divorced Capricorn may start dating again. relationships. Singles will find love in social gatherings or through friends. Old relationships need to be renewed. Plans to get pregnant can wait for now.

The Capricorn health is getting better this month in November 2016. Alternative and spiritual therapies like chakra yoga and crystal healing will be effective.

Overall November 2016 will be a socially busy month for the Capricorn born, both in terms of career commitments as well as personal enjoyment.