November 2016 Aries Horoscope foretells that that career and personal accomplishments will dominate over home and psychological issues. All challenges in the domestic areas will require necessary attention.

Planetary placements are concentrated towards the ascendant sign in the chart and the House of Love is strong for the April born in November 2016. Interests of other people and allegiance to society will come first over personal skills and assertion. Independence will not be of help and the Aries personality will have to be flexible in their approach.

In November 2016, the Aries born will be deeply involved in self-awareness, humanitarian activities as well as improving their personality by getting rid of disagreeable habits. Overseas travel and higher studies are indicated for the Rams this month. 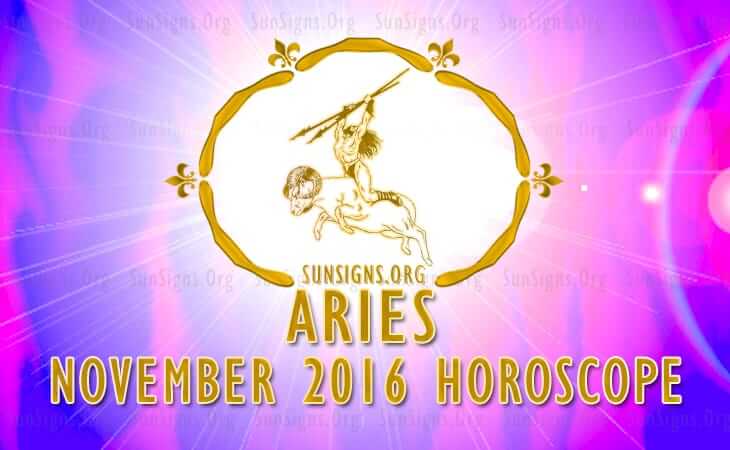 The Aries 2016 monthly zodiac predictions suggest that if you are seeking employment, it should be circumspect before accepting job offers.

After mid November 2016, time will be opportune for starting new businesses.

The Aries 2016 astrology forecasts for November predict that social connections and skills will be an important factor in wealth generation this month. Business partnerships and social engagements will be required to earn money. Monetary progress for the Arians is also achieved by helping others become prosperous after the third week. Success of other people will lead to your financial growth indirectly.

Arians will have extra resources to clear pending loans in November 2016, and financing projects will not be a problem. Investments in government securities will be profitable. Monetary position of your spouse or love partner will be excellent and the family will assist you financially in your ventures.

The November 2016 sex horoscope predicts that love for the Aries will be more physical till the 17th and becomes more idealistic after that. You are looking for spiritual compatibility in your married life.

Love for single Rams is to be found in academic surroundings. Overseas locations and foreigners will be another source of romance. You will hear of news related to children and pregnancy in the family.

Aries health shows drastic improvement in November 2016 and will improve further. Spiritual healing will be effective too. Here are a few foods for longevity that is necessary to stay fit. Exercise and diet routines can be modified only after the middle of the month.

Overall the 2016 Aries November horoscope portrays a period of financial and professional development as compared to domestic bliss.