Aquarius November 2016 Horoscope predicts that the House of Career is dominant and hence the spotlight will be on business and profession.

Home and self development issues can be in the backseat for a while.

A successful job will have a positive effect on the family and there will be all-round happiness.

The House of Religion is stronger this month for the Aquarius zodiac sign.

You will be more interested in learning new things and understanding the real meaning of life and existence. 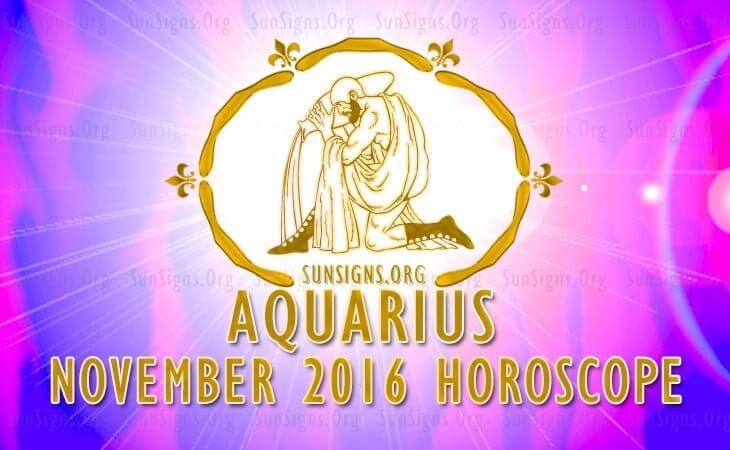 The November 2016 Aquarius astrology predictions foretell that in spite of the chaotic conditions at the work place, there is considerable career development during the month. You will be able to face all the challenges in your job or business with confidence and courage.

Social contacts will assist the Water Bearers in career growth in November 2016. You will make new friends who will be instrumental for success in your profession. Socializing and partying with the right people will enhance your career prospects.

The 2016 monthly forecasts for the Aquarius star sign shows that the financial situation will be wonderful this month. Your financial planet Uranus will begin its onward move on the 20th and the projects in limbo will get a new lease of life. Your financial acumen will be strong and will result in rapid monetary growth.

The earnings of Aquarians will mainly accrue from career in November 2016. You will have the encouragement of family members and seniors at the work place for your fiscal efforts. Income from dealings with the government will be another source.

Romance and passion will be wonderful for the Aquarius in love in November 2016. New relationships will be formed in social gatherings. Friends will help you in finding your true love.

Single Aquarians will find romance at the place of work with colleagues or even fall in love with their boss. You will have romantic sexual opportunities while pursuing your academic interests. Love will bloom slowly due to the influence of planet Saturn. Marriages or pregnancy are unlikely this month.

Health prospects for the Aquarius are excellent in November 2016. You have to work smartly as stress due to profession will be great. You should concentrate on important things like eating healthy when you are working. Healing yourself with yoga and meditation is an excellent solution.

To conclude, the November 2016 Aquarius Horoscope forecasts a busy month on the career front with not much time for family and loved ones.