Mithun Rashi 2016 predictions suggest this is the year of transitions and movement for Gemini.

2015 set the stage for 2016. There is much you have been working towards from prior years that will come to fruition this year. 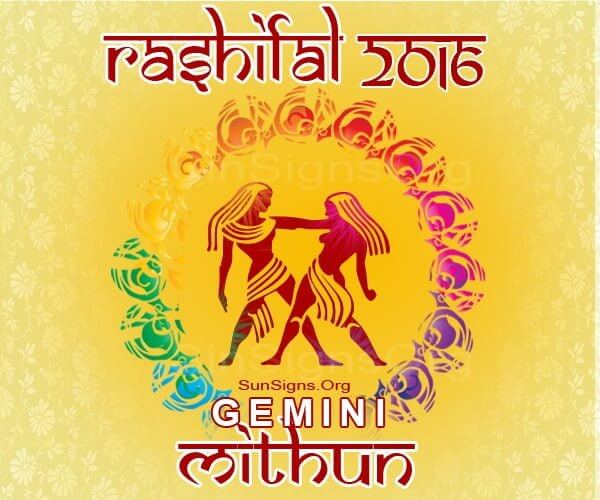 The Mithun Rashiphal 2016 also forecasts that some will be experiencing some insecurity about work and career. For those of you who have a job or career, you will finally be rewarded for all your hard work from the last few years.

You will especially see your progress in business and profession from mid-June through Mid-September.

In other words, it is a good time to learn new skills and to grow for the Gemini zodiac sign. Try not to take on too much. It is better to do what projects you can and do them well than to take on too many and not do well.

The 2016 astrology predictions also suggest that you will see financial success in August as well. It will not be a windfall; hard work is all that will bring your success this year. Income and money related opportunities will also appear early on in February 2016 for work from the past.

Also keep good records and money receipts. There is a possibility for confusion and misunderstandings. Trust will be a big issue this year – both your trust of others and theirs of you.

The 2016 Rashifal foretells that you will crave deep love connections and powerful bonds all year. You will get more serious about your relationships. Mithuna Rasi people usually like to keep it casual but that will change this year. Some people will leave your life. And some Mithun Rasi love relationships will break up. Others will take that next step and commit to someone.

Mid-September through early October 2016 will bring problems in your love life. Some can see the return of an old lover during this time forecasts the 2016 Bhavishya Rasi Jyotish.

In April 2016 you will end unhealthy relationships and commit to good ones. Mid-November to the end of the year, you will seek and have more love in your life. This could also be a good time for the Twins to date someone new if you are single. Sex and passion will be the key to success of affairs.

Mithun Rasi people will be very popular this year and attract new people into their life. You will have better relations with your siblings and neighbors this year.

The best times for love and romance are March 2016, the end of June and beginning of July, and the end of September to mid-October. The Mithun 2016 horoscope also predicts that this is a good time for pregnancy.

The 2016 Mithuna Rasiphal foretells that you could slip into depression if you allow yourself to focus on the negatives. Try to focus on the positives. It can be difficult with all the work and stress on your shoulders but take time out for yourself and to relax. Also make lists and try to keep organized to help deal with the pressure. March, June, September and December 2016 are going to be your trying times.

To conclude, the Varshik Rashifal for Mithun Rashi predicts that 2016 is the year of change and personal growth. It may be a tough year at times but it is not without its rewards. This promises to be a very good year for those looking for love. This could also mean temptations and infidelity. So be clear and precise about your boundaries. Be careful whom you trust. With the new people that you meet, make sure you get a clear picture of who they are, the good and bad before you let them too far into your life.

Keep a look out for the 2017 Mithun Rashifal.