The Meen 2016 Rashifal foretells that this year about changes and new opportunities for the Pisces. Usually this moon sign is an introvert and shies away from the world but not this year!

You want to introduce new things into your world and especially your career. Normally, the Fish people aren’t usually so focused on their career either. This will truly be a different year for you. So allow your horizons to broaden and allow yourself to grow. 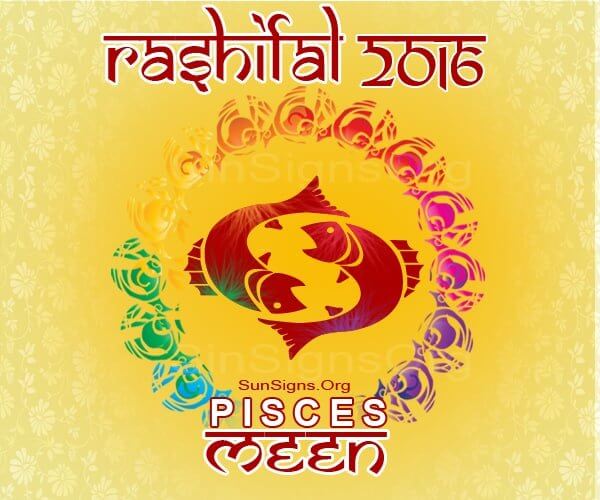 The 2016 Meen Rashi predictions forecast that in the first half of 2016, this is a good time for you to focus on your work and career. For those of you looking for work, focus on something you have always dreamed of doing. You will easily be able to find a job you like. Pay more attention to your colleagues for they may find you the job of your dreams.

For those of you that are already satisfied with your current job field, focus on promotion. Meen Rasi businessmen should concentrate more on marketing their products and services widely in 2016.

There will be work related issues during the summer months. Favorable periods for changing jobs or starting new business ventures are the end of February to the beginning of March, June, and September.

Do not change jobs nor make any major work related decisions in August 2016. You won’t get the rewards or compensation that you deserve during this time. Also during this time management might be tough on you. Just to make it through.

Meena Rasi natives with their own businesses will have to work hard to make it grow during the first half of 2016. You may have to hire experts to help you in this regard.

The Bhavishya Rashi 2016 horoscope for Meena sign suggests that a new job or new promotion will improve your financial well-being. Just try not to overdo it Pisces.

In the first half of 2016, you may have to borrow money in order to make the changes you want. Don’t worry it will work out better then you dreamed. This will be awkward for you but your friends and family will be happy to help. Don’t be afraid to explain your financial plans. You will be able to pay them back by the end of the year and make a profit. So don’t fret about it too much Pisces.

Don’t spend too much in March 2016 though. You might need to fix some broken items or be targeted by a thief. Be careful and try to save for this time. Also in August 2016 avoid borrowing or lending money. The risk of losing more is high.

The Varshik 2016 Rashifal predicts that many of the Meen Rasi natives will find love this year! May, July and October 2016 will be a good time to meet someone new. Dating someone special is also possible. Sex will be on the mind of singles when they are seeking their soul mate.

The end of the year from September through December 2016 will be a great time romantically for the Pisces as well. They will look more attractive to others during this time period. Their relationships and family will grow this year.

The Meena Rashi 2016 astrology forecasts show that for the first half of 2016, you will be meeting with doctors and specialists to treat your long-term health issues. You may not be feeling badly but you will find answers to improve your health. Your health will get better but you still want to take care of yourself.

In April 2016, you may get an upper respiratory infection. You may also get sick in August to September or November – December 2016 with some sickness or the other. Alternative healing therapies will give you the relief that you are looking for.

The 2016 Meen Rashiphal foretells that you may feel overwhelmed at times this year but overall it will be a good year for growth and change. Also, by the end of the year things will turn around for the better and you will be and feel like a new you!