Pisces May 2017 Horoscope predicts that the House of Family is more powerful than the House of Career, and Mars is in your zodiac sign. Planetary aspects for Family are favorable while for Career they are regressive in May 2017. So there is a need to work on the harmony of the family environment and establish psychological stability first for the Pisces zodiac sign.

Pisces, personal enterprise and bold actions will be important for most part of May 2017. After that you will be dependent on others. 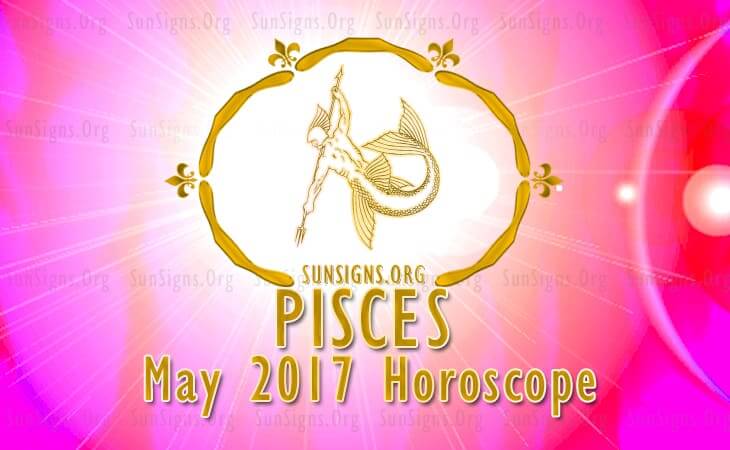 The 2017 horoscope prediction for Pisces forecasts that career issues will be low key this month. You can use this opportunity to dream about your career goals and the way to implement them at a future date. Existing business projects can be put in abeyance for the present in May 2017 by the Pisces personality.

Pisces May 2017 Astrology Forecasts For Finance:

Pisces, money is chasing you in May 2017 and the monetary position is attractive. Not much effort is required to accomplish your financial goals. Your personal charm will attract investors, and you will procure expensive articles. You have the liberty to direct your financial course as you wish.

The Pisces May 2017 astrology forecasts predict that fiscal wealth can be improved by social networking and with the help of partners. Investments in health care and fashion industry will yield good returns in May 2017.

The 2017 monthly horoscopes predict that there are ample love opportunities for single fishes this month. Unfortunately the Pisces compatibility will be capricious and your requirements vary by the day.

Pisces your will be looking for affluence and materialistic things in relationships in the beginning of May 2017. After that intelligence and eloquence will draw prospective lovers towards you.

2017 May Health Astrology Predictions For The Fish:

The May 2017 Pisces horoscope predicts that health will be fabulous for most of the month. Enough rest and relaxation will help you to maintain your fitness. Emotional health is important this month and can be obtained by air meditation and spiritual healing.

The May 2017 horoscope for Pisces personality shows that this is a good month for money and family but career decisions will be delayed.

Look Out For ->> 2019 May Pisces Monthly Horoscope