May 2017 Libra Horoscope forecasts that career issues, family affairs and psychological matters crave for equal importance during the month. Your success depends on how you manage all the facets of life.

Libra, you have to depend on your social skills to be successful in May 2017. Independence and initiative will not carry you far this month. 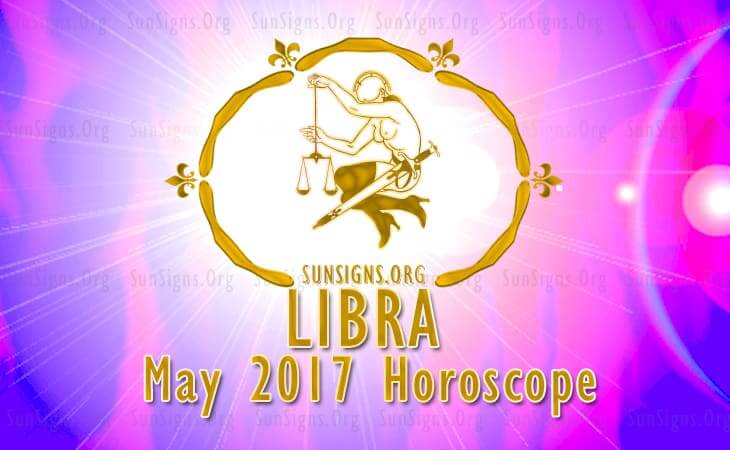 The Libra astrology forecasts for May 2017 predict that the planets in your house of career are favorable in this month. Your boss will like your work and raise your salary. Businessmen will be successful in new endeavors.

Libra May 2017 Astrology Forecasts For Finance:

The zodiac 2017 predictions for the Libra birthdays foretell that the financial situation shows different trends at different periods of the month. Planetary aspects are not positive and after the 20th of May 2017 monetary situation will be difficult.

You cannot fast track your financial ventures and should be happy with the slow progress you are likely to make. However the financial fortunes of your love partner are brighter and you will have the support of your mate. Libra, you can help your partner to prosper in May 2017.

Proper financial planning and debt restructuring are necessary for the Librans in May 2017. Cost reduction and cutting down of expenses will help fiscal position.

The 2017 May Libra love astrology forecasts show that love will be unpredictable during the third week of the month. There may be unexpected tie-ups and breakdowns in relationships. Marital relationship with your partner will be volatile. Married people should avoid extramarital affairs. They should also avoid getting pregnant this month.

Single Librans will have many opportunities to get into love relationships. Love may be found in your workplace or when you are seeking spiritual solace. Love is more sexual passionate than romantic. Read about Libra sexual traits.

2017 May Health Astrology Predictions For The Scales:

The Libra health shows signs of radical recovery after the 12th of May 2017. It can be further enhanced by cleansing your body of toxins and by fitness routines. Libido is high and you should control your sexual urges. Hypothyroidism and diabetes symptoms need to be taken care of in May 2017.

Health of your love mate may cause some concerns. Emotional health requires to be taken care of in addition to physical health for the Librans in May 2017. Read about Libra health and well-being.

The Libra May 2017 monthly horoscope forecasts a period of unpredictability which might cause some confusion in your love and career.