May 2017 Capricorn Horoscope predicts that family concerns and psychological matters rule over career. Situation in the family environment appears to be highly disturbing and it requires lot of your patience to keep peace.

Family members have fluctuating tempers and you are also affected by their tantrums. This leaves hardly any time for the Capricorn sun sign person to plan their career goals.

Capricorn, both independence and social skills are equally important during the beginning of the month. You need to rely on compromises and teamwork in May 2017. During the rest of the month of May 2017, you are free to chase your goals the way you think is right. 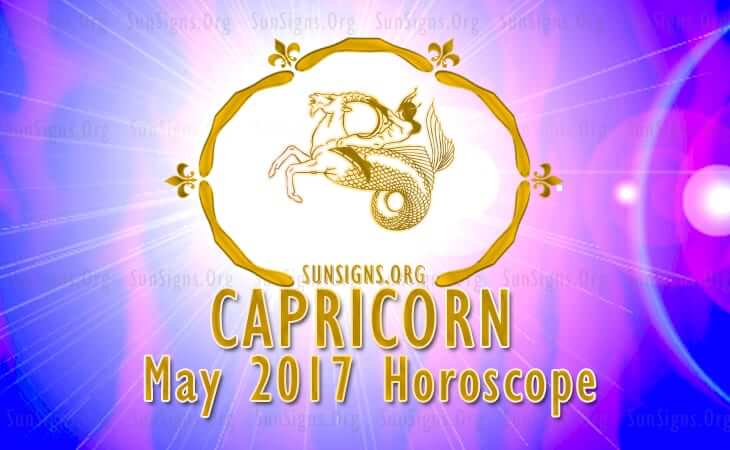 The Capricorn May 2017 monthly horoscope foretells that the environment at the workplace is quite pleasant and active. In spite of the family disturbances, you seem to enjoy the cooperation of family members and friends for career growth.

If you are a Capricorn man or Capricorn woman looking for a job, you will realize your ambitions after the 20th of May 2017.

Capricorn May 2017 Astrology Forecasts For Finance:

The horoscope 2017 for the Capricorn star sign predicts that finances will be fluctuating this month with plenty of ups and downs in earnings. However your financial risk capacity will see you through the crises this month. You will be creating money on your own terms and spending it too on the family. You can make profits by investing in real estate deals in May 2017.

The sea goats should use their financial intuition wisely to make more money and avoid all risky speculative investments in May 2017. Your efforts will yield good monetary returns.

The 2017 love and sex astrology predictions foretell that the Capricorn will have very good opportunities for love partnerships this month. Middle of the month will be a flourishing time for love for the goats. You are able to attract the opposite sex with your charm and make the right decisions on selecting the right partners.

Capricorn, your relationship with children will be enjoyable during the month. Relationship with your partner will be harmonious throughout the month. Pregnancy related discussions will occur this month. Singles who are ready to get married, might tie the knot in May 2017.

2017 May Health Astrology Predictions For The Sea Goat:

The Capricorn zodiac predictions for May 2017 forecast that your health is much better compared to the previous month. Your awareness of fitness regimes and diet plans to improve health will encourage you to maintain your energy levels. Your health and assurance will permit you to have more fun and entertainment in life. Eating the right breakfast foods and a good lunch diet will take you a long way.

The Capricorn May 2017 horoscope predicts a lot of enjoyment and activity both at home and in your work place.

Look Out For ->> 2019 May Capricorn Monthly Horoscope