Aquarius May 2017 Horoscope forecasts that you will be more family centered and will enjoy the company of your family members. You are trying to achieve happiness by attending to the needs of your family. Career plans for May 2017 can be made in the emotional comfort of a family. This can be enforced later when profession becomes important due to planetary influences for the Aquarius zodiac sign.

The May 2017 horoscope predicts that the Aquarius can be independent and have their own way. Later you have to seek the cooperation of others and have to make necessary compromises to attain your objectives. Interest of others will be more dominant and you have to be flexible in your approach.

After the 21st of May 2017 those with a February birthday will be interested in scholarly studies. You can direct your energy towards writing and creative areas. 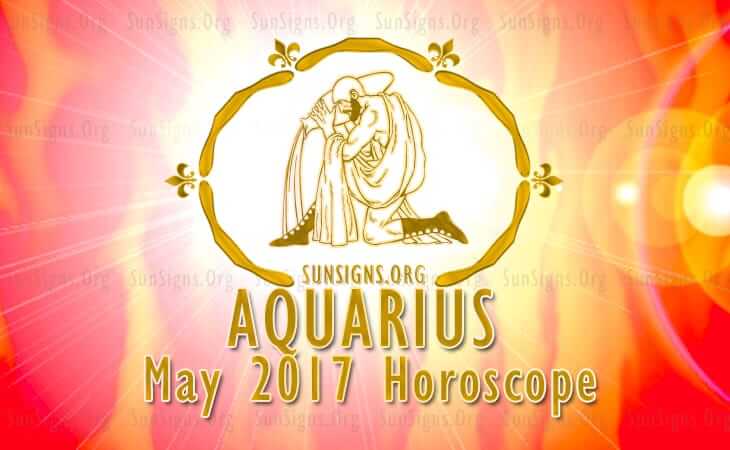 The astrology 2017 predictions forecast that career and business will be hectic in May 2017 for the Aquarians. You might not agree with your colleagues and partners on many matters. Be diplomatic and deal with the situation wisely in the May month.

Aquarius May 2017 Astrology Forecasts For Finance:

Aquarius, contradictory influences of Mars and Neptune in May 2017 will make your monetary situation dicey this month. Aggressiveness of planet Mars is countered by the caution of planet Neptune, and hence your actions need more intelligibility.

Once things are clear, you can execute your financial plans without fear. Financial disagreements with your partner are likely this month in May 2017.

Monetary situation for the Aquarius personality will still be good. Your love mate will help you to earn money. Money can be made in property dealings.

The love 2017 predictions forecast that love is excellent during the month of May for the Water Bearers. Singles will be looking for partners who will give them emotional support. Love is to be found in the vicinity of the home before the 21st, and in social gatherings and conferences after that.

Aquarius, you are looking for more pleasure and enjoyment with your partner after the 20th by partying and socializing. You might even keep secrets from your spouse with regards to pregnancy.

2017 May Health Astrology Predictions For The Water Bearer:

The May 2017 Aquarius astrology predictions foretell that health will not be that encouraging till the 20th. After that, life will become more hectic. You might try music therapy or earth meditation to calm your inner self.

The Aquarius monthly horoscope for May 2017 predicts that this month you will tend to spend a lot of time socializing rather than on any serious job.

Look Out For ->> 2019 May Aquarius Monthly Horoscope