Pisces May 2016 Horoscope forecasts that home and emotional aspects should be your priority this month. Career progress will be hardly perceptive and will take time to fructify.

This is a good month for the Pisceans to focus on personal achievements and real world life. Your way is the right way and you have the independence to follow it. Things may become difficult later and hence try to achieve as much as possible at the earliest.

May 2016 can be extremely traumatic because of the Mercury Retrograde and you have to depend on your physical vitality as well as emotional strength to come through this month. You require the grace of the Supreme Power to face your life challenges successfully. Your innate spiritual power will guide you through these difficult times.

Students might have to modify their educational schemes and shift to other institutions in May 2016. Eligible students will complete their courses and qualify for graduation. 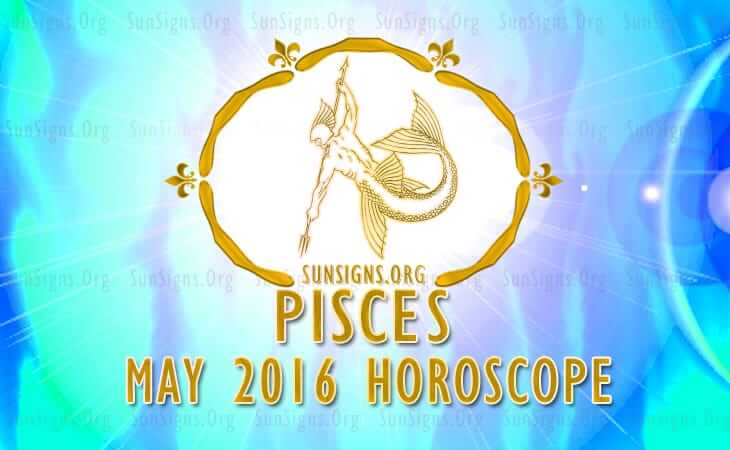 The May 2016 Pisces monthly predictions foretell that progress in career will be slow during the month.

You can use this time to visualize new business growth plans for execution later.

Pisces May 2016 Astrology Forecasts For Finance:

Pisces, planetary positions are wonderful for your finances. Not much effort is required to make money and your financial acumen is very strong. You have the encouragement of family, friends and others because of your proficiency in business matters, and you will get new contracts easily.

You can afford to take risks and dabble in speculative ventures. You will enjoy life while making money. You have surplus money to spend on personal luxuries. Investments in entertainment, metals and energy will be profitable.

The May 2016 astrology forecasts for Pisces predict that love is more realistic this month. You will be looking for wealthy love mates during the first week of the month.

Pisces love will face challenges in the middle of the month. Your fascination with career and family members may put off your spouse. Existing relationships will face trial during the last week but are likely to stay on course. You might even want to start planning for a pregnancy.

Until the 5th, Piscean singles will find romantic partners while chasing monetary goals. Love will exist in the local environs or in educational fields from the 5th to the 19th. Family surroundings will provide romantic prospects for dating in May 2016.

2016 May Health Astrology Predictions For The Fish:

The Fish’s health will be good till the 21st and you have to take suitable precautions after that. Try different home remedies and natural healing for common ailments.

To conclude, May 2016 is a good month for the Pisces to save for the future and improve relationships with friends and family.

Look Out For ->> 2018 May Pisces Monthly Horoscope