Capricorn May 2016 Horoscope forecasts that domestic issues and emotional affairs will be predominant while career and professional matters will be in the back ground during the month.

You should use this period to solve problems at home and concentrate on improving your emotional strength.

Most of the planets are in the Western sector of the natal chart for the sea goat in May 2016. Other people and their interests will be vital for success in life.

Your independence and assertion can be low key. You have to adapt to the environment and seek the collaboration of others during this period of Mercury retrograde. 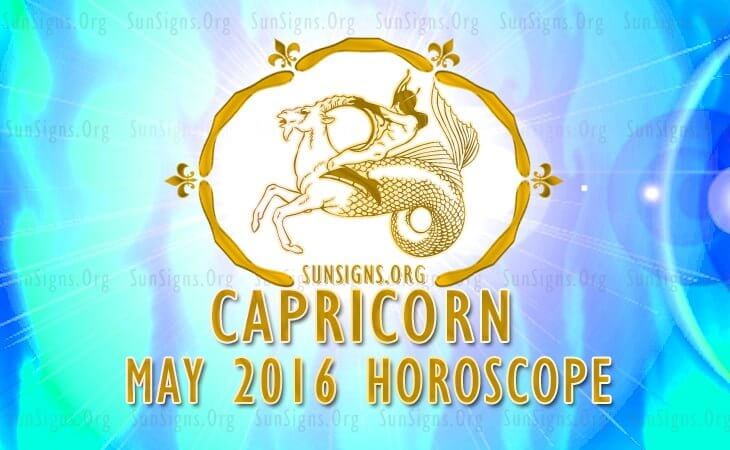 May 2016 is an excellent period for Capricorn zodiac job seekers. During the first week of the month, job opportunities will come from family members.

After that you will get employment and business opportunities while on a vacation.

Capricorn May 2016 Astrology Forecasts For Finance:

The May 2016 Capricorn forecasts suggest that wealth creation will be quite robust during the month till 21st. You will face obstacles after that, but cash flow will not be hindered.

You will have the help of family members and close friends in accomplishing your monetary goals. Financial discretion will be excellent and you can always use the help of experts. You will not hesitate to contribute to philanthropic causes generously in May 2016.

The Capricorn people will feel the influence of Mars positions in matters of love throughout the month of May 2016. You should avoid conflicts with partners and family members. You may involve family members in your business ventures. There will be plenty of socializing in the home environment. Sex and passion will be foremost on your mind. Pregnancy might be planned if sexual compatibility with spouse is good.

Capricorn men and women should be gentle with your partner or spouse and eliminate probabilities of disharmony during the month. There will be more awareness of the activities and problems of children, and relationship with them will become stronger.

Singles will be forceful in forming love partnerships that might lead to a breakup. You should take failures in relationships in your stride to move ahead.

2016 May Health Astrology Predictions For The Sea Goat:

The Capricorn 2016 May astrology predictions suggest that health will be great during the month. Your interest in remaining fit will be helpful in maintaining your vitality. Reiki healing and crystal healing will boost your well being.

To conclude, the 2016 May Capricorn horoscope predicts that resolution of domestic problems might keep you busy this month.

Look Out For ->> 2018 May Capricorn Monthly Horoscope