Aquarius May 2016 Horoscope foretells that home and emotional issues will be stronger compared to career and professional matters during the month. Profession will be governed by emotional strength and you can devote this time for planning your career growth.

In May 2016, self-confidence and hard work will be necessary to attain your targets in life. The Aquarians will need to be aggressive and are not held back by others on their way to success. Social grace will be helpful, but not necessary.

The Lunar Eclipse of the 4th of April will result in more chaos and adjustments. These things are good for progress in life. 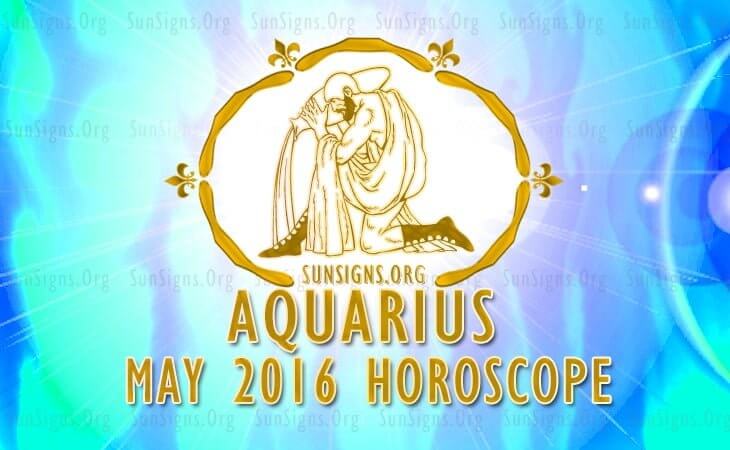 The 2016 May Aquarius predictions suggest that job description will undergo change in the present company or in a new organization. The whole corporate structure will be facing serious transformations which will have an impact on your career.

You may shift to an entirely new job or business. You are held back in your career by your yearning for pleasure in life.

Aquarius May 2016 Astrology Forecasts For Finance:

The monetary situation will not be that rosy this month for the Aquarius zodiac due to the Mercury retrograde 2016. Planetary aspects are not benevolent after the 22nd May.

Your financial strategies require evaluation and necessary changes should be undertaken to revive your prosperity. Your perception of money is weak during the month and will have to be strengthened for the future with suitable alterations.

Love will be challenging till the 21st May for the Water Bearers and spiritual incompatibility appears to be the basic problem. To resolve the conflict you should reassess and review your religious inclinations which are the sources of disharmony between family members.

Your spouse may not get along well with your close friends. (Find out what to do when your best friend hates your boyfriend). However, the May 2016 love horoscope for the Aquarius predicts that there is light at the end of the tunnel. You will have harmony and fun with your spouse during the last week of May 2016.

Single Aquarians will have few romantic opportunities this month and they will not be happy with the partnerships they make. Your expectations of amusement in sex and love in 2016 will be difficult to meet with. Pregnancy might not be on the cards.

2016 May Health Astrology Predictions For The Water Bearer:

Health will be a matter of concern till the 21st for the Aquarians. It can be made better with rigorous exercise and good nutrition. Some quality sleep will be of great assistance.

To conclude, the Aquarius May 2016 astrology forecasts foretell of serious financial problems which need to be resolved with a clear mind.

Look Out For ->> 2018 May Aquarius Monthly Horoscope