Aries March 2018 Horoscope foretells that it will be a month of contradictions. Till the 20th, spirituality will dominate your life and personal enjoyment will take over after that. During the spiritual period, you will be involved in building up your spiritual quotient through meditation and other spiritual methods.

Your interests in life will be in social service and philanthropic activities. Later things will change radically and Aries zodiac sign will have plenty of chances to indulge in bodily pleasures.

About 90 per cent of the planets are located in the eastern half of the chart and Uranus will be in your sign from March 12. The focus will be on independence and determination for Aries personality. Whatever you want, you can achieve it with your own efforts. Ram is not depending on others or situations.

This is the time to review your past accomplishments and the mistakes you have committed. You can make corrections to your past planning and execution methods and employ them from now onward. Set a target for yourself and try to achieve them with your new strategies.

2018 March Career Horoscope predicts that career prospects are driven by personal ambitions and you will have all the energy to attain your career objectives.

2018 astrology forecasts for Finance suggest that financial situation is excellent and you will be highly successful in your monetary ventures. Whatever you want to achieve financially, you have no problem in doing it. There is a sense of detachment with monetary success for Aries born.

2018 Love Predictions foretell that your craving for independence will result in conflicts with family members. There will be peace between yourself and family members after discussions and compromises in March 2018.

advertisement
advertisement
With your obsession about fun, you are looking for friendships with members of the opposite sex and romance is not important for you if you are a single person. Aries will have many prospects for love or friendship in social gatherings and in the workplace. Refer to Aries compatibility. 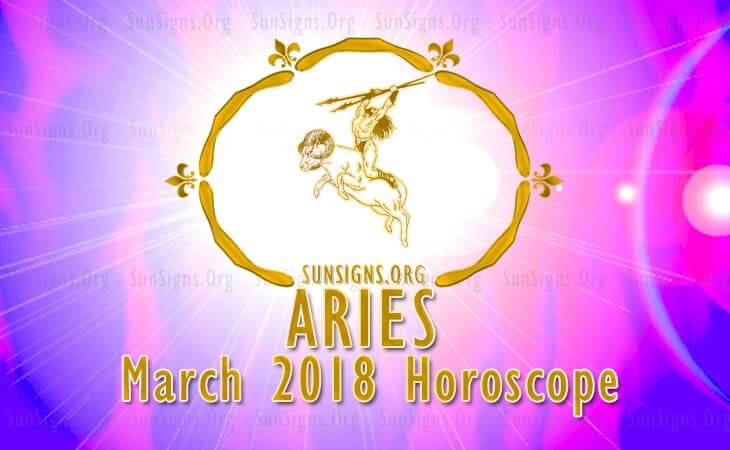 March 2018 monthly horoscope points to fabulous health with tonnes of energy after the 21st. Mars will make you more energetic after the 24th. You should be careful not to overstretch yourself and harm yourself with reckless activities. Energy should be channelled for constructive purposes during the Mercury retrograde.

March 2018 Aries predictions foretell that finance, career and health will be wonderful during the month. Relationships have to be handled diplomatically. Refer Rashifal 2018.