Taurus March 2017 Horoscope predicts that your house of career is dominant this month. Hence the emphasis will be on professional matters, while domestic and emotional matters can be on the back burner for the time being for the Taurus star sign.

Taurus, you have all the liberty and power to take decisions regarding the goals of your life this month in March 2017. Others can be safely ignored for the present and you can run your life as per your own abilities and wishes.

Spirituality will be prominent during this month for the Taurus personality. You will be deeply involved with spiritual guides, teachings, mystic visions and experiences. You will be engaged in charitable events and humanitarian deeds. You can analyze your happenings in life and make necessary changes to your objectives and course of execution in March 2017. Get the 2017 Chinese horoscope here! 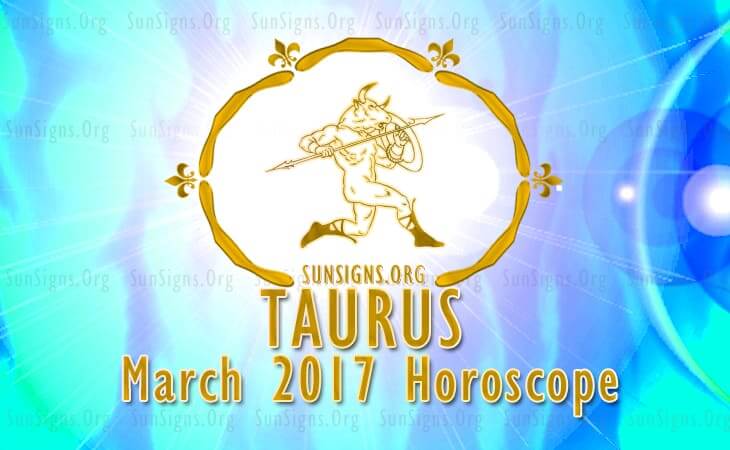 The March 2017 Taurus monthly horoscope says that professionally you will have decent growth. It may be less hectic this month compared to the previous month. The free period can be used for enjoying the results of your hard work and for expanding your social network by making new friends and contacts.

This month in March 2017, the aspects of Mercury are not favorable. This may affect the pace of your monetary progress of the Taurus born. Major decisions on procurement and savings should be done during the first three weeks of March 2017. Awareness and tolerance regarding the delays will solve half the problems. Money flow will come from sales and social links for the bulls.

The 2017 love astrology forecasts that love for single Taureans is to be found in religious places and in humanitarian events. Marital life and love life will be extremely pleasant towards the end of the month. Maybe you can even plan to get pregnant in March 2017.

The health of the Taurus sun sign will be very much enhanced in March 2017. All lingering illnesses will vanish. Be it water retention or tooth ache, you will be pain free in March 2017.

The March 2017 horoscope for Taurus predicts that though your health will be excellent this month, you will need to have patience when it comes to dealing with people.