Scorpio Horoscope for March 2017 foretells that this is a period of change over from domestic concerns to career, ambitions and outer success. Scorpio, use the beginning of the month to dream about your career targets and work out a strategy to attain them in the latter part of March 2017.

The monthly horoscope for 2017 predicts that independence and enterprise will give place to the interest of others and social intelligence for the Scorpio personality in March 2017. Social networking is essential to accomplish your targets. You have to resort to cooperation and collaboration with others.

Your residence may undergo major renovation and decoration. Family environment will be turbulent, Scorpio. You have to use your relationship skills to maintain the harmony among family members in the month of March 2017. 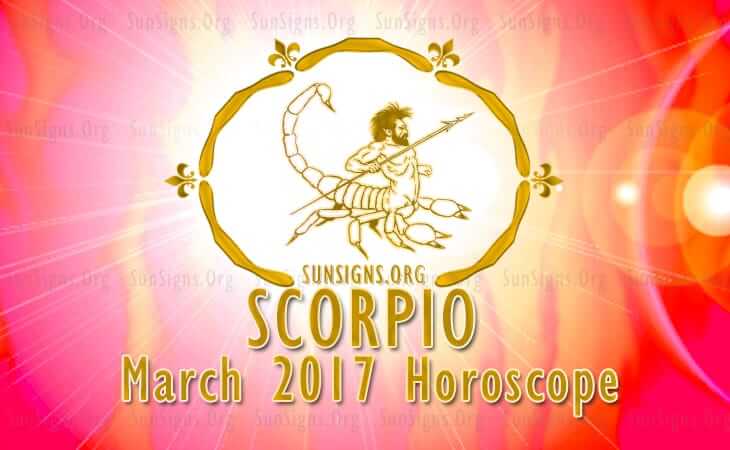 Unemployed Scorpios will find new job opportunities in March 2017. Your family too will help you get employed or start a new business.

The horoscope 2017 for the Scorpio star sign warns  that vigilance is necessary in your monetary transactions this month. Risky investments will not be profitable. After the 20th, money flow will be greater and financial intuition will be more powerful.

The 2017 love horoscope predicts that single scorpions will find ample opportunities to get into love partnerships. Love can be found in social events, parties and sports fields till the 22nd of March 2017. After that romantic opportunities exist at the workplace with seniors or colleagues or in health centers. Love is all fun till the 22nd and becomes more serious after that.

Married Scorpio couples will seek more entertainment and imagination in their sexual lives. There will be more passion till the 23rd. After that you are more practical and affectionate in your marital life. You might even think of having a baby. Read here about Scorpio sexuality.

The general physical fitness of the Scorpio born will be good throughout the month of March 2017. More attention should be paid to the psychological aspect of health to eliminate physical sickness. There may be some health concerns in the family. Boost your metabolism and you will be more energetic.

The March 2017 horoscope for the Scorpio zodiac sign predicts a period of fulfilling your ambitious plans and commitments.