March 2017 Sagittarius Horoscope predicts that domestic matters and psychological aspects of life are prominent over professional matters. You can employ this period for working out your career objectives and the right way to attain them in the future. March 2017 is suitable for making major repairs to your house and for beautification of the interiors.

The personal initiative and self-will of the Sagittarius personality will yield to social grace and charm in March 2017. Peace in life depends on the actions you have previously taken independently.

Sagittarius, work on a social service project will be on hold till the middle of March 2017 due to planetary influences and will resume after that. 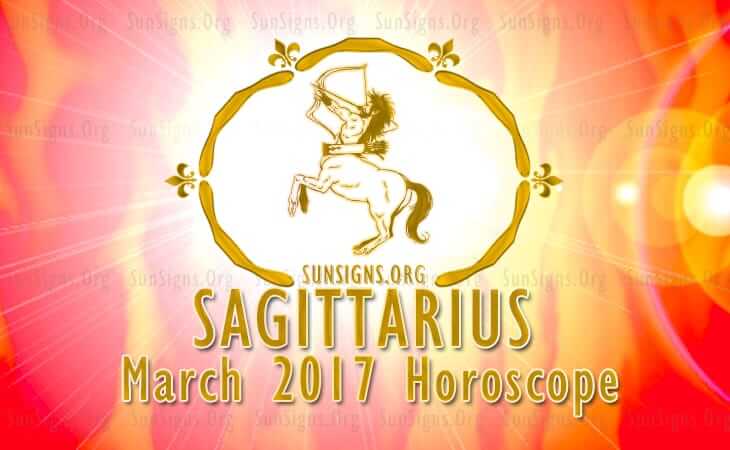 The 2017 career astrology predictions for the Sagittarius zodiac sign foretell that your job will be on the back burner during the month. You can use this period to analyze your business strategies and make necessary changes to make it effective.

The Sagittarius March 2017 monthly zodiac predictions also forecast that your financial situation will show different trends during the month due to the effect of planet Saturn. Your financial intelligence will be very good, but still hard work is necessary to increase money flow. You tend to spend more money on holidays and entertainment. Excessive spending should be curbed and all risky ventures should be put on hold.

Monetary progress for the Archers will be supported by social contacts, colleagues and persons in the academic arena in March 2017. The astrology 2017 prediction warns tat fiscal openings may come in religious places and while partying. Your investments will yield fabulous returns in March 2017, Sagittarius.

Love will be fast and natural till the 20th of March 2017 for the Sagittarius born. Planetary positions in signs will make it more complex after that. Love and sexual relationships will have to be re-examined for stability. Be careful before you get into committed partnerships or plan for a baby in the month of March 2017.

Sagittarius, your health requires more attention till the 20th March 2017. It can be enhanced by conserving energy by smart work and enough holidays. Towards the end of March 2017, your health will be wonderful. Have a bowl of yogurt or eat an avocado to boost your well being.

The Sagittarius horoscope for March 2017 asks you to reconsider your decisions in life and take it easy with your overall health.