Pisces March 2017 Horoscope predicts that this will be a month for professional commitments. Though domestic issues and psychological matters are more prominent, career is still necessary and important for the Pisces zodiac sign in March 2017. Emotional strength will help you succeed in your job and business. 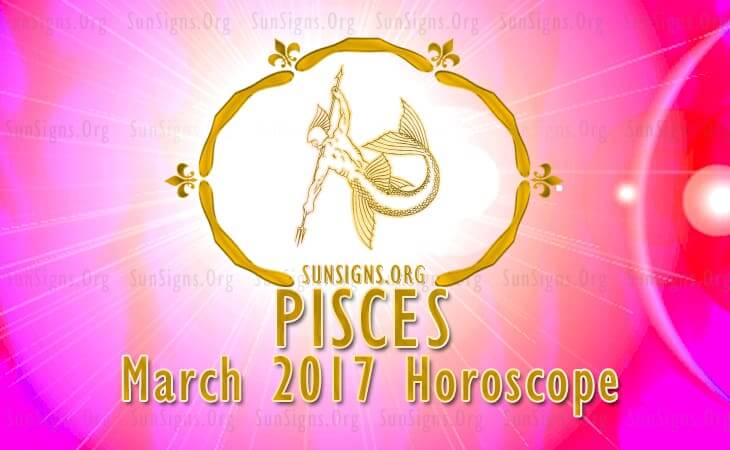 The birthday horoscope 2017 forecasts that the influence of Sun will help the Pisces born to attain their career objectives faster. Planet Mercury will favor the success of authors and performers. Their artistic talents and communication abilities will improve enormously in March 2017.

Planet Mars is not favorable for your finances in March 2017, Pisces. All monetary dealings should be done with a certain amount of circumspection. Money flow is excellent and will flow from career, advertising and sales promotion, family contacts and social network. The 2017 monthly horoscopes predict that finances can be enhanced in March 2017 by dealing in stocks and shares, goods and equipment.

Pisces, the Lunar Eclipse in March 2017 may affect the financial prosperity of your partner, present relations with your financial agents and borrowing capacity. Financial intuition of the Fish natives will be very high. You will get visions about the methods to be followed to achieve financial prosperity.

The March 2017 Pisces horoscope also foretells that there will be some issues with your marriage and social connections. Pisces marriages may face breakups while single Pisceans may get into permanent relationships and marriage. Present sexual relationships and pregnancy matters may need to be reviewed.

Singles will have many opportunities to get into relationships like online dating and dating their friends. And because of the planetary influences, they will allow love to develop gradually.

Pisces, your health will be wonderful in March 2017. Your vitality will be very high. Personal charm and grace will be enhanced because of the influence of planet Venus. Here are a few remedies for facial care and removal of wrinkles.

Overall, the Pisces horoscope for March 2017 forecasts a period of bliss both on the professional and personal front.