Capricorn March 2017 Horoscope forecasts that the House of Family is more powerful than the House of Career this month. Aspects of Jupiter are also not favorable for career. Hence career issues will be in the background while domestic affairs will be in focus for the Capricorn personality. It is time to build up a harmonious home base and enjoy your precious time with family members in March 2017.

Capricorn, whatever independent actions and decisions you want to take should be done before the end of March 2017. After that you are at the mercy of others, and your actions depend on social skills and compromise.


Forward motion of more than 80 per cent of the planets in your natal chart in March 2017 ensures that there will be turmoil and action this month. This is basically against the inherent nature of the Capricorn zodiac sign. But you should remain calm. 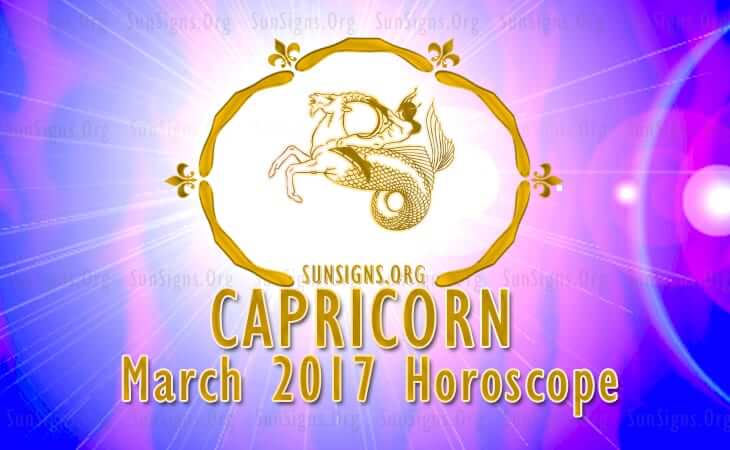 The March 2017 horoscope predicts that the Lunar Eclipse will highlight the defects in the professional life of the sea goats. You will have a difficult relationship with your seniors at the workplace. Changes in job profile in the present job or changeover to a new job are likely. Capricorn businessmen will make radical changes to their strategies and enter into new avenues in March 2017.

The 2017 zodiac predictions forecast that the financial health of the Capricorn born will be excellent this month due to the favorable influence of Mars. You tend to be bold and like to make speculative investments. You have the encouragement of family members in your fiscal ventures. If you are thinking of buying a new house, do it after the 20th of March 2017. Investments related to real estate and home environment will yield good returns.

The March 2017 monthly astrology predicts that love is highly confusing for the Capricorn natives this month. This is due to the influence of planet Saturn on your romantic partnerships.

For most part of March 2017, conditions are favorable for having love affairs and after that existing bonds will be under trial. You will have many social opportunities to get into new romantic and sexual alliances this month. Pregnancy, children and family will keep you busy in March 2017.

Health will be excellent till the 20th for the Capricorns. After that you have to work smartly to preserve your vitality. You should focus on maintaining your emotional and psychological well-being in addition to the physical fitness. If you are considering change of exercise and diet routines, it should not be done after the 20th as planetary aspects are not favorable.

The March 2017 Capricorn horoscope predicts a month of domestic bliss with a few professional changes.