Cancer March 2017 Horoscope forecasts that your House of Career is stronger than the House of Family this month. Professional issues will dominate over domestic matters for the time being for the Cancer personality. Success in career will also bring happiness in the family in March 2017.

Cancer, this is a month of transition. You are neither autonomous nor reliant on your decisions and actions. Sometimes you are free to act as per your free will while during other times you have to depend on social skills to achieve goals in life.

The personal attitude of the Cancer person towards life will be polished and altered due to the Solar Eclipse of the 24th March 2017. There will be major disruptions in your religious environment. Your intellectual capabilities will be widened by new understanding and by overseas travel. 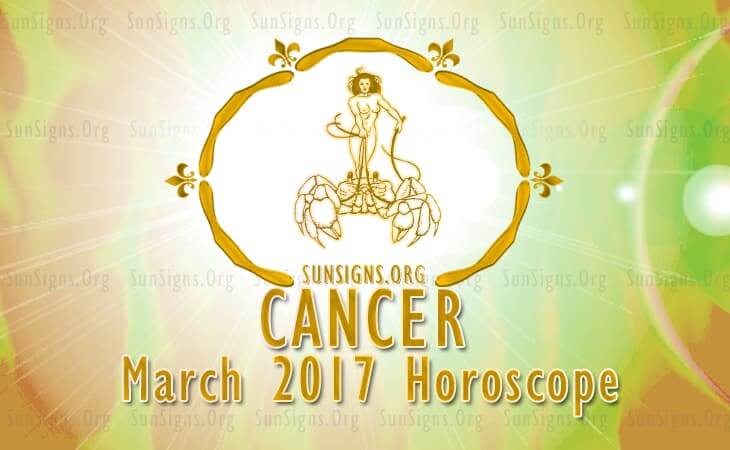 The horoscope 2017 for the Cancer born shows growth in career will be phenomenal in March 2017. You can expect financial rewards and improvement of seniority in your profession during the month. Businesses will flourish.

The March 2017 horoscope for Cancer also predicts that money flows from your career because of your capabilities and status. You have the encouragement and assistance of seniors, family members and friends in the execution and attainment of your monetary targets. Your investments will yield good returns while your life partner will contribute to financial prosperity considerably. Any money due from the government will be reimbursed and will add to the monetary wealth of the crabs.

Cancer, your financial plans and investments will be affected by the Solar Eclipse of March 2017. There will be fine tuning and small corrections to your beliefs about money and financial methods which will help in your prosperity.

The Cancer monthly predictions for March 2017 foretell that there will be volatility in romance and love relationships towards the end of the month March 2017.

Love is subject to various external factors and disturbances especially obsessive boyfriends. Any shift in residence or facelift to the existing residence can be put on hold till after the Lunar Eclipse of March 2017. Married Cancer star sign people need to rethink their plans for pregnancy.

Cancer, life will be frantic after the 20th of March 2017. You will have to take many breaks to maintain your physical and mental health. You might come down with the common cold or pull a muscle suddenly.

The Cancer horoscope for March 2017 predicts a fabulously good month in terms of career and money.