March 2017 Aries horoscope forecasts a month of advancing momentum. You should decide what you want and start working on your targets. You should create your own future and interest of others will come later. The month is ideal for the Aries zodiac sign for launching new ventures. As Mercury will not be favorable after the 20th, your projects should not comprise of communication or internet promotion.

Emphasis in March 2017 for the Aries personality will be on matters concerning mysticism, personal desires, community events, relationships and profession. Your success depends on how you cope up with all these various pressures. The ram will have a tough time gratifying all the people involved in these areas. 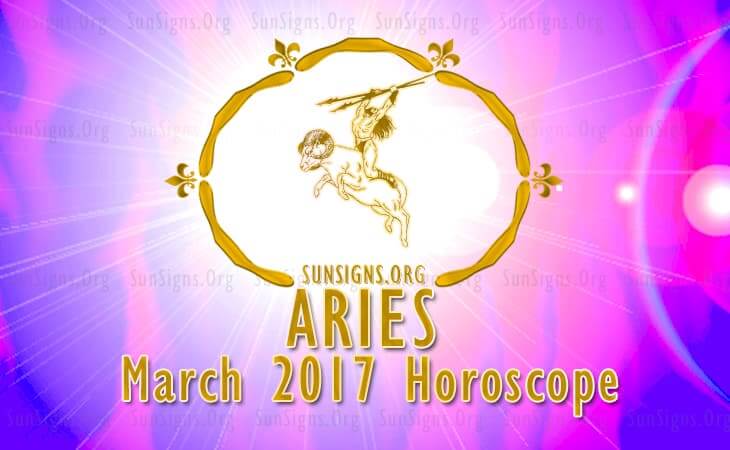 The 2017 March career horoscope warns that Aries professionals will have an easy time in their careers for most part of the month. And after that life will be frenetic at the work place.

You should employ your free time to formulate your goals and to revise your business strategies taking into account the various flaws in your earlier plans. People seeking employment will be highly successful till the 20th of 2017 March. You have to be careful before accepting the offers after that.

The 2017 astrology forecasts predict that monetary openings for the Aries born will be plenty during the month.

Your job will be to decide on taking up the right source of financial investment.

The 2017 love predictions foretell that love will be chasing the Arians after the 22nd of 2017 March. You will have ample opportunities to form romantic alliances. Singles will find romantic opportunities in a spiritual environment. You will be looking for spiritual strength in your partners.

Aries, you may also find love while you are engaged in humanitarian activities and social service. There may be some turmoil in the relationships of married and single Aries in love.

The March 2017 horoscopes foretell that you are looking for highly ethical love and your partner may have difficulty in measuring up to your standards. Your spouse or love mate will be oversensitive for most of 2017 March. You have to be very careful in dealing with your partner especially when it comes to sex and pregnancy talks.

The 2017 March Aries horoscope forecasts that health will be wonderful during the month. Existing illnesses will show better healing after the 20th. Stick to your present health regime and diet. Coconut water and honey can make a lot of difference.

Overall, the March 2017 monthly predictions for the Aries sun sign says that this will be a great month provided you work on your personal goals.