Aquarius March 2017 Horoscope forecasts that the House of Self is more dominant than the House of Others. Planet Mars is also favorable for you this month. This will result in more vigor and haste. People involved in sports and athletics will do well. There is a need to curb your anger and remain peaceful even when things are going against your wishes in March 2017.

Passion and sensuality will rule the life till the end of March 2017 for the Aquarius personality. After that your interest will shift to intellectual and mental aspects of life. You will have plenty of opportunities to expand your knowledge base.

Life will be less hectic till the 20th of March 2017and after that the original pace of change resumes. You are overwhelmed by the changes happening around you and you are very much happy about it. 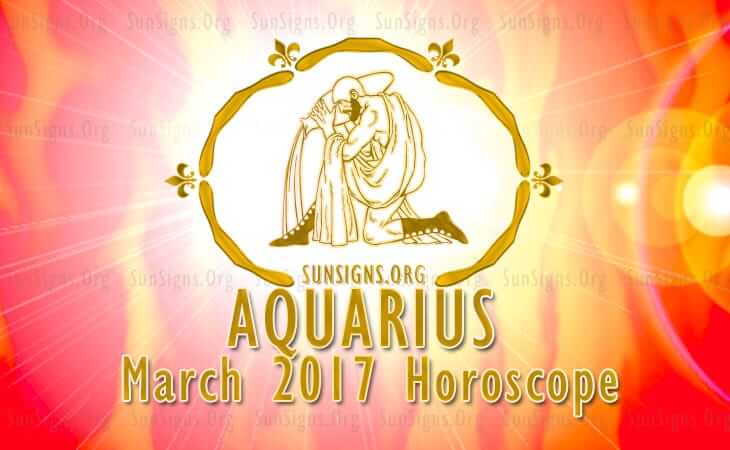 The 2017 horoscope predictions for the Aquarius zodiac sign foretell that career and business will be on the back burner this month.

The March 2017 Aquarius monthly forecasts predict that finances are wonderful this month. You will have money to buy all materialistic things required for the family. Money flow shows a rising trend for the Aquarius born. Do not invest in speculative ventures after the 20th of March 2017.

You are likely to splurge money on your social activities and your love mate. Financial strategies require a review and course corrections to stay afloat. The Solar Eclipse of the month will give you opportunities to set your financial house in order in the month of March 2017.

Friends and family help you to boost your earnings, Aquarius. Money can be made by ingenuity and imagination. Money comes from sales promotion and advertising activities.

The March zodiac predictions 2017 forecast that single Aquarians will have abundant opportunities to forge love partnerships. Love is to be found when you are chasing your monetary objectives or in academic circles when you are interested in scholarly pursuits. While you are looking for riches in love till the 20th of March 2017, your outlook shifts towards intelligence and money after that. Love can be found in academic environments, or in close quarters in the neighborhood.

The beginning of March 2017 will create an emergency in present partnerships of the Aquarius natives. A decision has to be taken regarding the fate of the partnership either way. You are looking for liberty in your commitments and not be tied down by pregnancy and children.

The Aquarius horoscope for March 2017 shows that your health will be wonderful and you should stick to your fitness regimes. Cleansing of body impurities and changes in diet plans will be effective during the first and last weeks of the month. Cinnamon and flaxseeds in your diet can prove to be beneficial.

Overall, the Aquarius March 2017 horoscope predicts a month of self development bundled with fun and enjoyment.