March 2016 Scorpio Monthly Horoscope forecasts that you will be emotionally ready for any shifts in your profession and in turn you will be more devoted to your family. Your career changes will be in accordance with your perceptions and hence there will be perfect accord between your career and family.

In March 2016 the Scorpions have to remember that self is not at all important, but others hold the sway. You should use your social intelligence more than personal skills and efforts. You have to adapt yourself to others and to situations if you want to attain your objectives.

The friendships and social circles of the Scorpio personality will be impacted by the Lunar Eclipse of 14th. Students may have to make major alterations in their academic career. Your spiritual attitude will improve during the coming months. 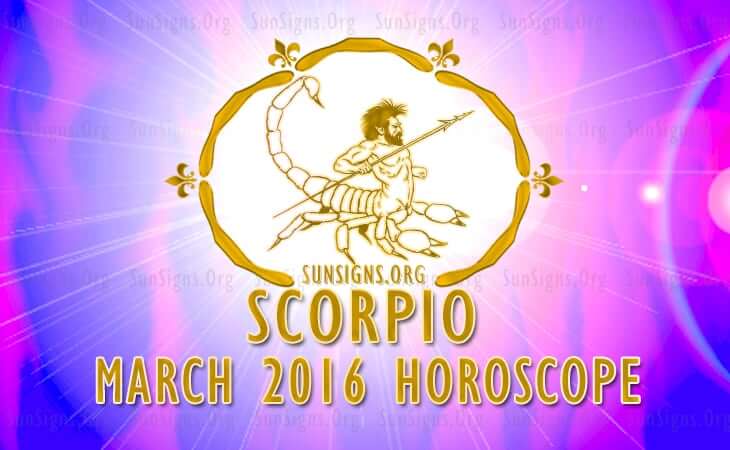 Scorpio, influence of the Solar Eclipse in March 2016 will be felt in your work environment. Your career and job will be subjected to important transformations. Your organization and business will also see significant modifications.

Progress will happen amidst various obstacles. The 2016 March Scorpio predictions suggest that you should convert challenges into opportunities and move ahead.

The March 2016 forecasts also show that planetary positions are not favorable for financial matters during the month for the Scorpio zodiac sign. This will result in unnecessary slowing down of earnings.

You can use this time to review your fiscal path and change your career course. You can also upgrade your business product to meet the requirements of your clients. All vital decisions regarding contracts and savings should be postponed.

In March 2016, Scorpio, you will be more forceful in love and this force will make sure that you will get into love relationships. You will be adventurous and will not be restricted by social phobias. You should allow love to grow slowly, and at its own pace rather than forcing it to happen wildly. Read more about Scorpio compatibility.

Single Scorpio in love will find their partner in close quarters while pursuing their professions or on online dating sites. Marriage and pregnancy is also likely if you are in permanent courtship. You are looking for people who are emotionally like-minded rather than scholarly types.

Health does not pose any problems during March 2016 for the Scorpions. You should resort to natural ways of enhancing your health, and your awareness about fitness and nutrition will be of great help.

To conclude, the Scorpio March 2016 horoscope predicts that this month presents an emotionally satisfying period.