Sagittarius Horoscope for March 2016 predicts that planetary relationships are beneficial for the family. Domestic concerns dominate over career and profession during the month. Your residence will undergo major repairs and restoration work.

During March 2016, sometimes you are highly independent, while during other times your social charm is at work. A fine balance has to be worked out if you want to achieve your goals, Sagittarius.

There will be major transformations in the education of children. Spiritual matters will be under trial for the Sagittarians. Change of beliefs and religious guides are likely in March 2016. You will be engaged in a big project and the situation will be challenging with plenty of problems associated with it. You will be forced to forego many things to keep it alive. 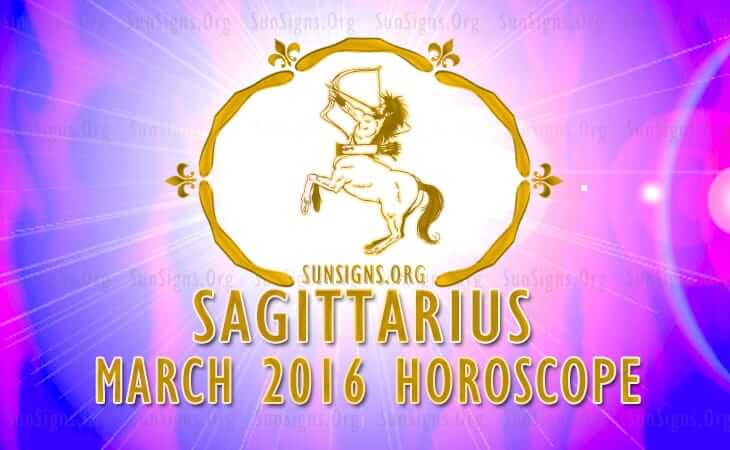 The horoscope 2016 foretells that the lunar eclipse of March 14th will impact your career prospects very much. You have to review your progress in career and make suitable changes.

Attention should be paid to the vital aspects of career after eliminating unnecessary issues. Your organization or industry will be facing major overhauling. Any change in job or business by the Sagittarians should be done after 25th and after proper scrutiny.

Planets are not cooperative in financial affairs during March 2016 for the Sagittarius zodiac sign. You have to be quite tolerant and wait till the 20th for improvements to happen.

Your earnings will come through more diligence. All risky ventures should be avoided. Unnecessary expenses should be cut down.

The Sagittarius 2016 March monthly forecasts warn that love will be highly turbulent during the month. You will not be able to see eye to eye with your spouse. Both of you indulge in a game of one-upmanship.

Harmony in Sagittarius compatibility can be maintained by conciliation or decision to have a child. Extra marital relationships will induce conflict in the relationship with your spouse. Singles will face sexual problems in their love partnerships.

Astrological 2016 predictions for March show that health will be fragile during the month for the Archers. This should be attended to by resorting to natural and herbal remedies. You have to conserve energy by acting on essential matters and avoiding unnecessary things. Improvement in fitness can be expected after March 20th.

To conclude, the Sagittarius 2016 March horoscope foretells of a demanding career as well as family.