March 2016 Libra Horoscope predicts that you will have plenty of chances to be active in your social activities. Planetary positions for love are strong and chances of forming new relationships are very bright. Your success depends on others and you have to go the extra mile to get their support.

Libra, success in the real world and career will be the key factors guiding your course during the month. Success in profession and business will automatically bring emotional satisfaction to the Librans in March 2016. You cannot ignore family issues and you should strive to maintain peace in family life.

If you are already into spirituality, the whole gamut of spiritual thinking will be revolutionized with different paths, guides and routines. Others will be forced into religious practices. 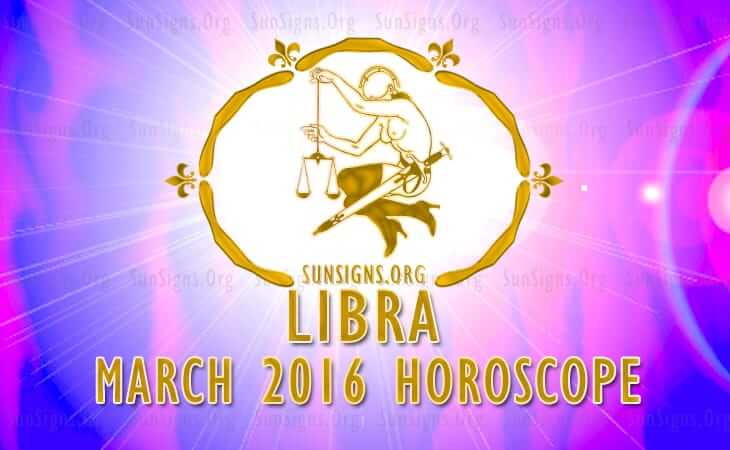 The Libra March 2016 forecasts warn that there may be unexpected changes in your job and you may move to another job. The work scenario is favorable and you should not face any problems in getting a new job.

Your outlook towards your career will be different and you will be more ruthless in getting things done. You can expect changes in the company or business you are associated with.

Planetary positions will force the Libra zodiac sign to make major alterations in your financial plans during March 2016. Property dealings will undergo significant changes. If you are in the insurance business, you will have to try out new methods of doing business.

The Libra predictions for the month of March 2016 foretell that existing Libra compatibility in relationships will continue inspite of serious challenges if you are serious about love and dedication. Your spouse will be interested in improving his or her academic expertise. Singles will find love in social gatherings and educational environments or even overseas. You may find your partner by helping your mate to accomplish financial goals.

Libra, there will be conflict between your family affairs, professional requirements and social engagements and you require all your skills to make them gel together. Pregnancy, sex and romance will take a backseat in 2016 March.

Health will be delicate for the Librans after the 20th and you have to rest and relax sufficiently to be in shape. March 2016 is auspicious for cleansing your body and for dieting. If you are addicted to something like smoking, the month is ideal for kicking the smoking habit.

To conclude, the Libra March 2016 horoscope suggests that you try to maintain a balance between work and family for real progress in life.