March 2016 Capricorn Horoscope forecasts that domestic concerns and emotional issues will dominate during the month. This is due to the fact that majority of the planets are in the Southern sector of the Horoscope and the House of Family is powerful after the 20th. Career will be prominent during the mid-month for the Sea Goats.

Self-will and personal confidence will be important for the Capricorn star sign in March 2016. You can have things the way you want and there is no need to depend on others in attaining your objectives.

There will be vital changes in the educational career of students due to the influence of the Lunar Eclipse of the 14th which is favorable. Religious practices may change during the month. 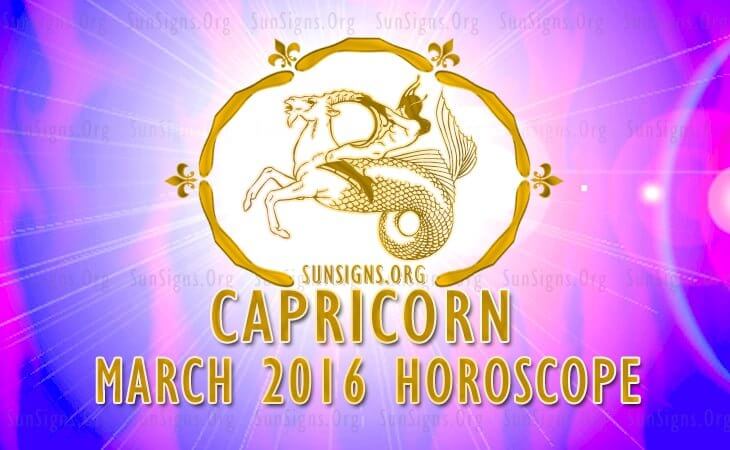 After 20th March you can initiate new career plans and you will have the extra energy to start them. Projects related to family or real estate business have greater chances of success for the Capricorn.

The Capricorn monthly predictions for March 2016 suggest that financial earnings are reasonable during the month. Money can be earned through product promotions and advertising the salient features of your products. Family expenses are expected after the 21st and should be regulated. However you will have enough money to cover these expenses.

The Capricorn 2016 love forecasts suggest that married couples or Capricorn in love will face challenges in their alliances due to the Lunar Eclipse. Strong relationships will survive while weaker ones will fail. Friendships will also be under stress. Take this friendship test to know more.

The Solar Eclipse of the 29th will impact your life very strongly. Family problems for the Capricorn personality which have been simmering will have to be sorted out. Your house will require major repairs and renovations which was pending for a long time. Domestic environment will be highly volatile.

Your spouse may not give the support you need. Remarkable things may happen for the Capricorn born with family elders. You have plenty of things to tackle in your hand during the month including children. Sex and pregnancy are the last things on your mind in March 2016.

Capricorn, your health will be good till the 20th March and after that enough relaxation will be necessary. Any modifications to your fitness and diet routines should be done after the 25th. Here are a few healthy breakfast and lunch ideas.

To conclude, the March 2016 horoscope for Capricorn foretells a month in which both family and career will take up all your time.