Aries March 2016 Horoscope forecasts that you will be ready to face all challenges with greater poise and self-respect. Assess your previous actions and make necessary changes to your goals in life with proper strategies before the 20th.

This month, your life will be greatly impacted by the Lunar Eclipse of 14th and the Solar Eclipse of 29th. It is advisable to reduce your activities during these times and relax by self-introspection and reflection. The professional career of the Rams will undergo major transformations. This may also induce some long-standing modifications to your fitness and nutrition routines.

Your personal looks and behavior will undergo a sea of change because of the influence of the Solar Eclipse in March 2016. Your body may require detoxification to get rid of the impurities. 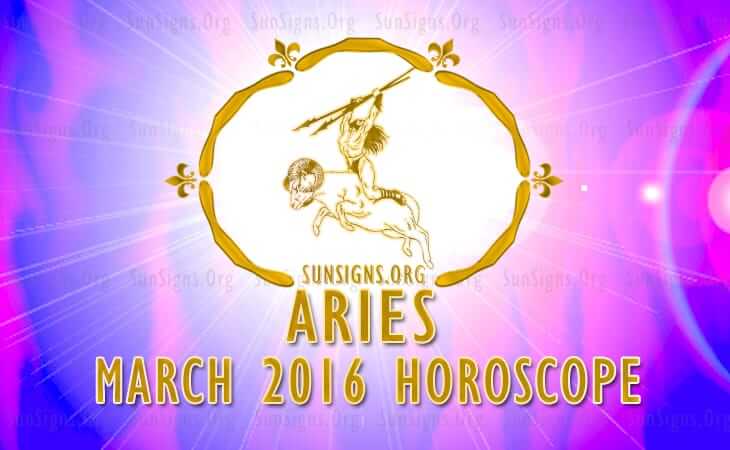 The March 2016 Aries prediction suggests that all difficulties at your work place will be removed during the month and there will be clarity on your career path.

Environment at the office will be enjoyable. People looking for employment will be flooded with offers, but you have to examine the merits of the offer before accepting them. Businesses will flourish with new ideas.

The Aries zodiac sign will have a very rewarding financial month in March 2016. There is no need for speculation or extra force to achieve your targets.

You will have the overwhelming support of your personal friends for the execution of your monetary projects. Your financial strategies will produce plenty of cash flow.

The March 2016 Aries astrology forecasts predicts that there will be resurgence of romance in your life due to auspicious planetary aspects. Singles will be presented with fascinating prospects while dating online. You will have the support of your friends and social circles in forming new alliances.

Love may be found while pursuing religious activities. You may find your soul mate while you are trying to accomplish your monetary targets.

Family environment and relationship with spouse may be turbulent during the month. This is not a good time to get pregnant.

Health will be outstanding after 20th March 2016 for the Aries personality. You can resort to physical massages, alternative therapies or enhancing your personal image with a makeover.

To conclude, the Aries 2016 March horoscope predicts a month when health related activities will be important in your life.