Aquarius March 2016 Horoscope predicts that you have to focus on home and domestic affairs. Emotional stability is necessary to have harmony in family and overall life. Career is in the backdrop right now for the Aquarians.

Aquarius, personal enterprise and ambitions are important and the progress in life is quite rapid in March 2016. Third week of March is auspicious for starting new ventures. Planetary positions are creating chaos in the world. But you are not affected by this disturbance, and in fact it will be advantageous for you.

Influence of planet Venus is felt in the way you look, you dress and your artistic appeal. You will be oozing with charm and allure. Aquarius men will easily draw women towards them and vice versa. 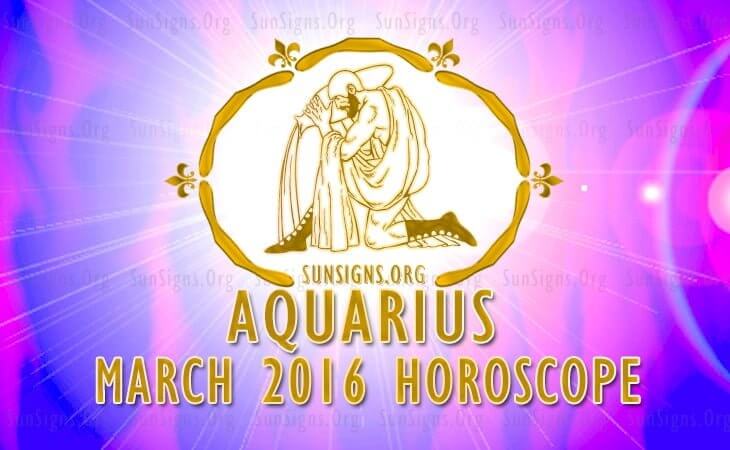 The 2016 March Aquarius horoscope suggests that possibilities of job change are there either in the same organization where you are working or you may shift to a new one.

Job environment will also become different. New business deals are in the offing.

Financial astrology shows that March 2016 will be an excellent month for the Aquarius zodiac sign. You have all-round assistance from your spouse, family members and friends.

Money can be raised easily. Your wealth will increase by helping others become richer. Financial strategies require reassessment and adjustments to suit the present situation.

Single Aquarians are likely to be reckless in love relationships. But the relationships will be for fun and entertainment and are not likely to be enduring. Existing Aquarius compatibility will be under stress. The Aquarius love predictions for March 2016 forecast that true love will flourish while weak ones will wither.

Married couples will follow their own individual paths which will hinder the intimacy between the couples. Pregnancy is better delayed for the Water Bearers in 2016 March. You will be looking for more devotion and romance in life with your spouse. You will have the encouragement of family members in accomplishing your goals. Your relations with your siblings will improve.

Health will be quite good during the month for the Water Bearers. You will be clear about your fitness and nutrition plans. March 2016 is favorable for starting a new exercise regime.

To conclude, the March 2016 Aquarius forecasts suggest a personally busy month. Finance and career related decisions need to be delayed.