2015 Kumbh Rashi forecasts show mixed results during the year 2015. Second half of the year will be better for the Kumbha Rasi people compared to the first half. There may be some conflict with friends and you may lose your temper. Be careful in your dealings and try to be diplomatic as far as possible.

The Kumbh 2015 Rashifal foretells that effect of Saturn will be felt throughout the year. Be prepared to face unexpected difficulties, health related problems and financial loss. 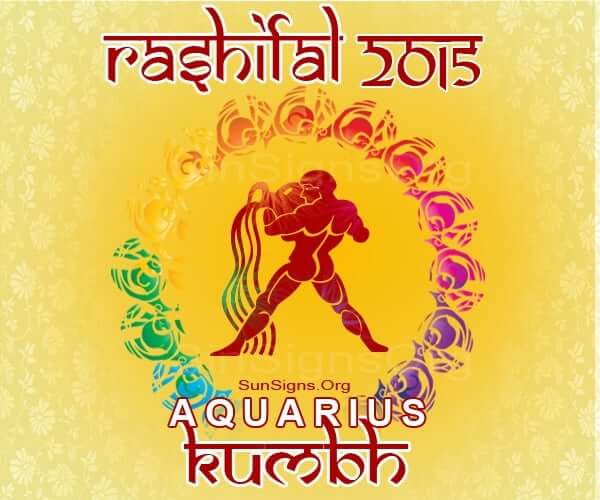 The Aquarius zodiac sign career astrology forecasts a good second half in 2015. Kumbh Rasi 2015 predictions show that businessmen may be deceived by close relatives. Litigation to solve business disputes is likely. You may face trouble from unexpected quarters. Academic career of students will be excellent during the second half of 2015.

The Bhavishya Rasi 2015 for Kumbh Rashi predicts that financial situation will be tricky during the first half, but will improve during the second half of 2015.

The Kumbh Rashiphal 2015 also foresees that the second half will be beneficial for love affairs. Do not think of getting into any serious affairs during the first half of the year.

Health of some family members will create anxiety during the first half of the year for the Kumbha Rasi people. You have to be stable while facing unexpected hardships. Parents will give all the necessary support when required. Family life will be harmonious during the second half of the year.

Travel for further studies is on the cards in 2015. It is a good idea to go to a holistic destination to regain your positivity.

Health will be delicate during the first six months, foresees the Kumbha 2015 Rasi horoscope. Hence take precautions from the beginning of the year. In the latter half of the year, you can expect sound health.