Pisces June 2017 Horoscope forecasts that the House of Family is very dominant for most of the month. Domestic matters and psychological aspects of life will be important for the Pisces star sign in June 2017. Career problems should be solved keeping the emotional aspect in mind. Family takes precedence over career for the time being in June 2017.

Pisces, your aggression will be limited in June 2017. You have to switch over from autonomy and assertiveness to being adjustable and flexible. Interest of others will dominate over self and you have to go by their point of view. Consensus and compromise will be essential for achieving your objectives in June 2017.

The 2017 zodiac predictions suggest that the Pisces’ imaginations are stronger in June 2017. If you are inclined towards writing and fine arts you will do extremely well. 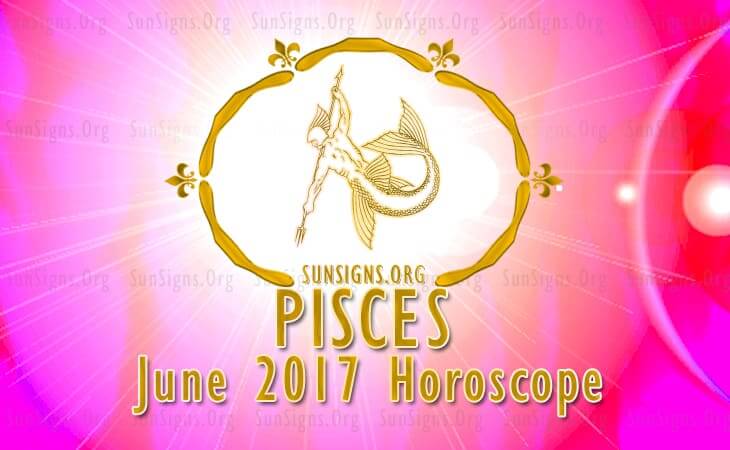 The June 2017 monthly horoscope for the Pisces birthdays suggests that if you are looking for a job, you will be successful. You have a tendency to get employed in a business owned by the family members.

You also have a problem on deciding the suitability of the job you are offered. You will also seek more fun and enjoyment, so that you can relish the work you are doing in June 2017.

The Pisces June 2017 horoscope forecasts that the monetary situation is very much sound and you are flooded with opportunities to make money in the first half of the month. After that personal enterprise is necessary to earn money.

You might start looking for opportunities which are more demanding and require more effort. Though you like to invest in speculative ventures, Pisces you should be cautious with all major financial decisions in June 2017.

The 2017 love and sex predictions foretell that love is very happening in June 2017 for the Pisces star sign. You will have plenty of opportunities to get into romantic alliances. Planetary aspects are not favorable for serious relationships during the month. Pregnancy too needs to be planned after some thought. You will find love in the vicinity of your family and friends in June 2017.

Single Pisceans also might find the right partner while enjoying a party or when on a holiday. By the end of the June 2017, you will find your love mate in your workplace or while you are taking care of your health, Pisces.

Planetary positions for the Pisces zodiac are favorable in June 2017 for renovating the house and for attending to family problems. Harmony in family relationships is important and you can make serious efforts towards that.

The Pisces health will be problematic for most of June 2017 and will improve later by proper relaxation. Right breathing methods will lead to good health. Be it a panic attack or the right posture to sit at the PC, you need to pay attention to the smallest detail in June 2017.

The June 2017 Pisces horoscope asks you to be careful when it comes to your health this month and be practical when making important decisions.