Libra June 2017 Horoscope forecasts that this month major alterations are happening to the planetary positions and their movements. Majority of the planets are moving to the Northern half of the horoscope for the Libra zodiac sign. The House of Career will become very strong towards the end of June 2017.

Professional needs are more for the Librans in June 2017 and will take precedence over Family and emotional stability. Career success is also dependent on harmonious conditions in the domestic environment which cannot be ignored in June 2017.

The 2017 monthly predictions for Libra forecast that this month will be a period of change over from social skills to independence. Till the 21st, you will have to make compromises to accomplish your goals. After that your own determination and action will yield the necessary results. The 2017 horoscope says that the Libra should learn to depend on their own judgement and actions in June 2017.

Favorable aspects of Venus will bring with it more admiration, popularity and respect in June 2017 for the Libra personality. This is one of the most joyful months and you will spend your time on fun and entertainment with plenty of partying. You will get many opportunities to travel overseas and to enhance your knowledge of foreigners and their cultures. Librans interested in spirituality will get ample opportunities for spiritual enlightenment in the June month of 2017. 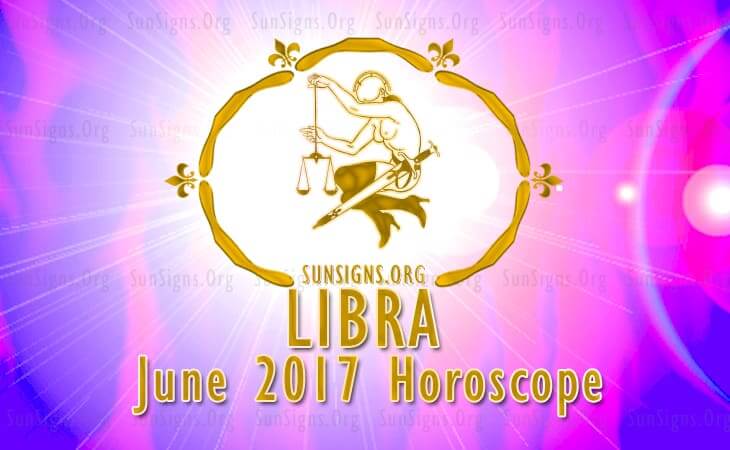 The June 2017 horoscope for Libra predicts that career requirements will be demanding this month and you will taste success after the 21st. As a Libra, you will have no problem in giving equal attention to your professional life, love environment and social network.

Finances are a bit strenuous for the Libra born till the 21st of June 2017. It will improve radically after that.

You will have enough money to spare for travel and academic pursuits.

The June 2017 love astrology predictions forecast that love will be full of zip this month, but will be subjected to pressures from profession, academic interests and domestic affairs. It is advisable to have pleasant relations with your life partner. A past relationship may be a source of embarrassment in June 2017 for the Librans.

Single Librans will be able to get into love relationships at the place of work or even fall in love with their boss in June 2017. Social gatherings and parties will provide occasions to form alliances with the help of friends and social connections. Libra compatibility will be spouse will be sexually satisfactory in June 2017 which might even lead to a pregnancy.

The Libra health will be delicate after the 12th of June 2017 due to the influence of planet Mars. You have to take sufficient rest and should try to harmonize your professional life with family life. Including canola oil and bell pepper in your diet can prove to be beneficial.

The June 2017 horoscope for the Libra zodiac forecasts that you will need to balance all aspects of your life this month equally well.