Leo June 2017 Horoscope foretells that though personal ambitions and professional matters should be on priority as the House of Career is empty. This indicates that there is nothing much to be achieved on the career front for the Leo zodiac sign in June 2017.

In June 2017, personal initiative coupled with hard work will yield good results for the Leo personality. Planetary positions are favorable for you to alter the conditions to your advantage in June 2017.

Leo, your course of actions will prove to be the right one and there is no need to be flexible and to change things to suit the wishes of others in June 2017. 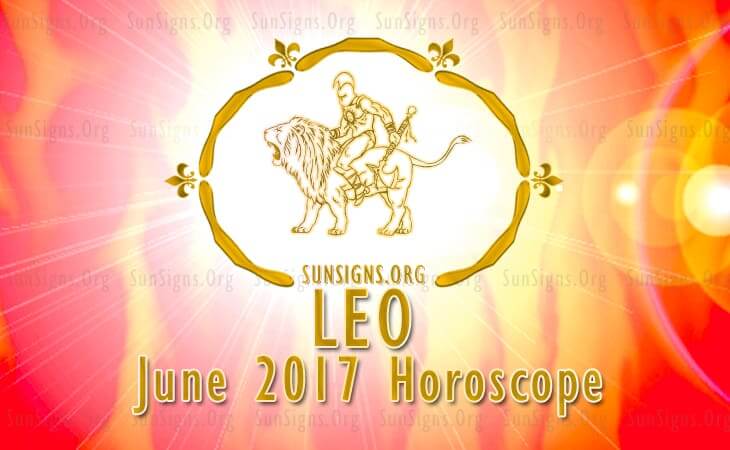 The 2017 monthly predictions foretell that in June 2017 progress in career for the Leo personality can be accomplished by becoming a member of professional associations. Involving yourself in philanthropic activities will help your career prospects after the first week of the month. The horoscope 2017 also predicts that spirituality will play an important role in the Leo’s professional advancement.

The June 2017  Leo astrology forecasts foretell that financial opportunities are chasing you this month and will become profitable by the end of the month.

Earnings will accrue from investments in media and technology. Membership to financial groups will enhance your money flow. The Leo natives can make profits by investing in real estate, construction and trading.

The Leo star sign people will also spend money on professional matters and social networking June 2017. You will be generous to give money to charities too this month.

Though Venus is favorable, other planets are regressive in matters of love for the Leo compatibility in June 2017. You should go slow in forming new relationships and allow current affairs to bloom naturally and gradually. You will be able to attract the opposite sex with your personal charm. Decisions on marriage, divorce or pregnancy should not be taken this month.

Marital life and Leo sexuality in relationships will be excellent in June 2017. You will have excellent understanding with your partner. Social life is active and you will make new contacts to improve your career and finances in the month of June 2017.

The Leo health will be very much enhanced this month compared to the last month and your energy levels will be high. You can plan your activities based on your daily biorhythms. Drinking flavored water and coconut water will prove to be beneficial.

The June 2017 horoscope for Leo forecasts that career and love can be improved by taking some personal initiative.