Capricorn June 2017 Horoscope predicts that during the beginning of the month you can be independent and assert yourself in whatever you do. After the second week of June 2017 social grace is necessary to accomplish your goals. The House of Others will become dominant for the Capricorn zodiac sign. Thus you will need to partner with others for achieving your goals for June 2017.

Traveling opportunities will come up during the month of June 2017 for the Capricorn born individuals. The month is also favorable for higher education. 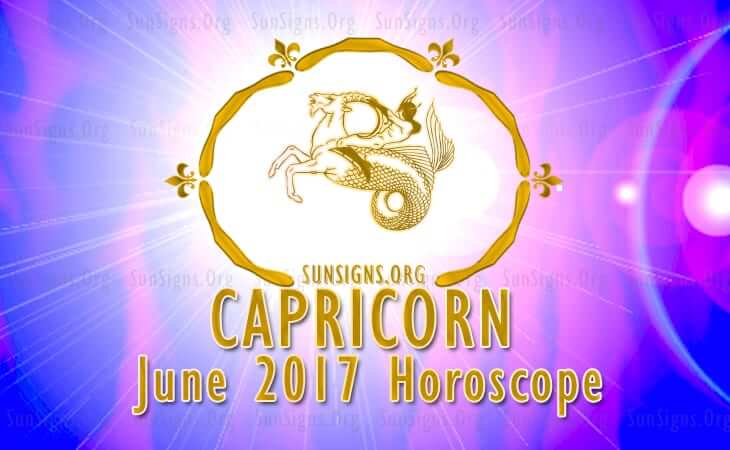 Capricorn, career dominates your activities this month in June 2017. Sea Goats seeking employment will be successful. Those employing people will have no problem in getting skilled personnel. Social gatherings and media will help you to get a job. Family members and neighbors will also help you in your business ventures.

The 2017 astrology predictions suggest that the third week of June 2017 is favorable for the Capricorn for job hunting.

The June 2017 Capricorn monthly predictions foretell that your monetary ventures are in the process of development, and you have to see that they will become profitable. You have to be patient about your investments as they will take time in yielding good returns.

Money can be made through your profession and from the service sector. Capricorn, you can expect windfalls during the second and third weeks of month of June 2017. Monetary openings are provided by your love partner and by social contacts after the 21st and you will have their encouragement.

The 2017 love zodiac forecasts a busy social life in June 2017 for the Capricorn. There will be disagreements between you and your siblings. You have to make some compromises to keep the relationship going.

The Capricorn family relationships will be under stress due to your social activities in June 2017. Your partner and family members will be at loggerheads, and this will add to your tensions. There is more romance in the lives of married couples in June 2017. You might plan to have a child.

Single Capricorn natives will have many opportunities to form love relationships. You will find love in people interested in fine arts and entertainment. You may also find romance in the most unlikely of places.

The Capricorn June 2017 horoscope forecasts that health will be excellent. It can be further enhanced by indulging in right fitness and diet routines after proper consultation. Sufficient sleep and relaxation too will help your well-being. Being mentally fit is essential for a healthy body.

The Capricorn horoscope for June 2017 foretells that a busy career and social life will keep you on your toes this month.