June 2017 Cancer Horoscope predicts that you will be more autonomous this month. You are ready to design your life and work on it. You have to balance this liberty with social grace to accomplish your goals. Both assertion and flexibility for the Cancer personality are necessary in June 2017.

Cancer, spirituality will occupy your attention in June 2017. You will be looking inwards and spending time on introspection of the past events and trying to rectify personal Cancer traits which are undesirable. During this period, your financial intelligence improves and will result in more wealth in June 2017.

The horoscope 2017 predicts that this is the right time for the Cancerians to analyze their past actions. Decide on the future course of action after deciding on your objectives by visualization. Contemplation will help you to get rid of bad Karma and will push you towards philanthropy and humanitarian services in June 2017. In the process the Cancer native will  get connected with the Supreme Power who will give you the confidence and vigor to lead your life in an entirely new manner. 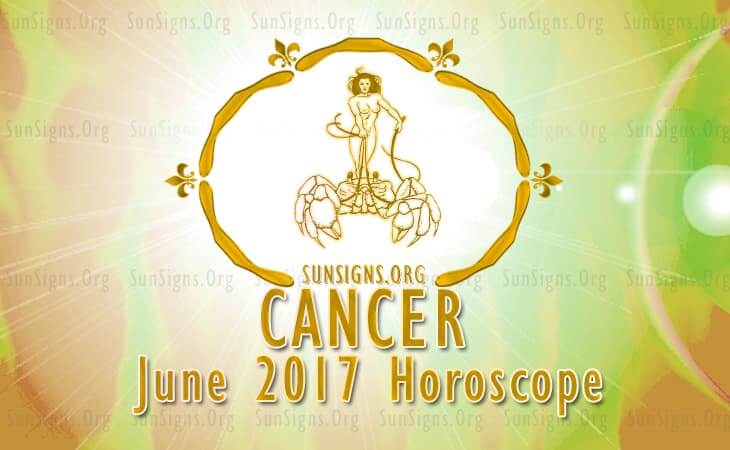 The Cancer June 2017 astrology predictions forecast that forward motion of Jupiter will help you to get employment if you are seeking a job.

Jobs you get will be to your liking and family connections will play a big part. Business deals will come through and your life will be filled with abundance and prosperity.

The June 2017 Cancer monthly zodiac forecasts suggest that money will come chasing you this month and financially you will become richer. Money from unexpected sources is likely towards the end of June 2017. You will spend money on personal luxuries. You will also donate to charities and social causes.

By the law of Karmic returns, money comes back in a greater measure through other means in June 2017. The Cancer financial intuition will be great and money will come by acting on your dreams and visions. Your personal image and outlook will be responsible for increase in your prosperity in June 2017.

June 2017 is a month when the Cancer compatibility will play an important role in success of relationships. The seventh house will instill feelings of commitment in singles. Married couples will be interested in planning for a child. Feng Shui tips for your bedroom can be used for better sexual relations.

The June 2017 horoscope for the Cancer star sign predicts that health will be excellent and will improve further. You are spending money to improve your personal charm and look. Use these home remedies for a soft face and smooth skin.

The Cancer horoscope for June 2017 forecasts a month of delight and pleasure in everything that you choose to do.