Aries June 2017 Horoscope forecasts that the House of Family will become dominant after the 21st. Domestic issues and psychological matters will prevail over professional problems. Aries, family problems require immediate attention and will take away some time from your career in June 2017.

Many of the planets are retrograde while some are moving forward in June 2017 for the Aries star sign. Retrograde of Uranus will force you to review your friendships and eliminate the undesirable ones. Forward momentum of Jupiter is favorable for travel overseas. Aries students pursuing university education will get into good academic institutions in June 2017.

The Aries astrology for June 2017 warns that you have to control your bad temper during the end of the month. Use your disappointments to develop your imagination. You can use this opportunity to develop your knowledge by reading and learning new subjects. Aries, you will excel in advertising and sales promotion jobs. You will have many opportunities for inland travel in the month of June 2017. 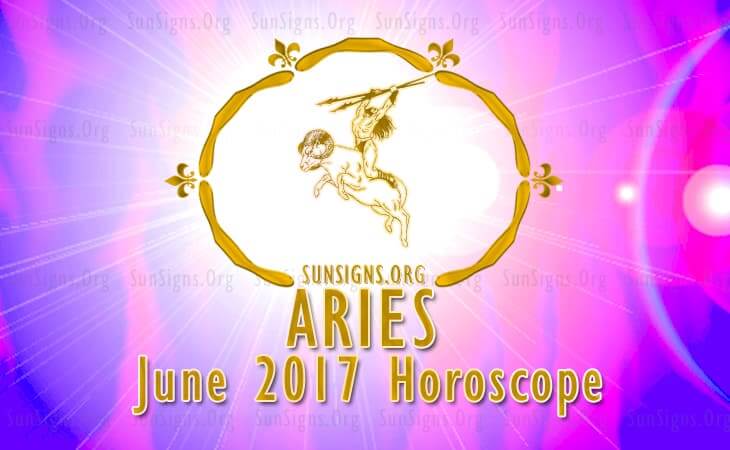 The career horoscope for the Aries personality predicts a promotion in your job in June 2017. Businesses will prosper and there are chances for development of new work related skills.

The Aries monthly zodiac forecasts for June 2017 predict that money can be made by trading in stocks and bonds. Your trading instinct is very good in the early part of this month. After the 21st, you can create money by long term investing. Money also comes from property dealings and with the help of family members for the rams in June 2017.

The 2017 horoscopes foretell that presence of Jupiter in the House of Love impacts the Aries compatibility in love relations. Existing relationships may move faster towards marriage. There is more aggression in your love affairs and it is advisable that you should allow love to bloom slowly and naturally in June 2017. Sexually Aries will be very active and ready to plan for a pregnancy.

Single Arians will be able to find love in the neighborhood, in academic institutions or long distance relationships. You want your lover to provide emotional balance and necessary care in your life. Your soul mate’s feelings will be very delicate in June 2017 due to the influence of planet Venus and you should be careful in handling your lover. You will like to spend time with your partner in your home’s peaceful atmosphere rather than partying outside.

The Aries health will show signs of stress after the 20th of June 2017. Your energy levels will be low. You have to work smartly and eat smart. It is important to maintain your emotional strength by working towards a peaceful family environment. Health can be improved by resorting to a proper diet regime in June 2017.

The June 2017 Aries horoscope predicts that this month will be romantic flings and new love experiences.