June 2016 horoscope for Virgo predicts that career issues will take up your time this month since planetary strength lies in the upper half of the horoscope towards the midheaven sign. Planetary positions are not favorable for home and family this month and domestic issues can be low key.

Virgo, eastern sector of your horoscope is more dominant in June 2016 and independence and aggression will mark your life this month. You can chart out your own course in life, but it will be judicious to seek the support of your social circle in attaining your goals.

Your engagement in a large business venture will drain out your energy and you will have problem dealing with the various aspects of life affected by the hard work. This will affect both the physical and mental health of the Virgos. 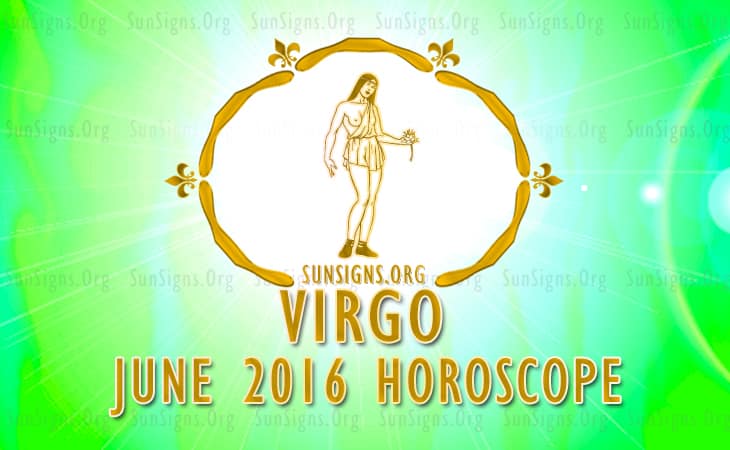 There are plenty of opportunities for career growth for the Virgo zodiac sign in June 2016. Venus in different sun signs will be benevolent towards the end of the month. Pay rises and promotions can be expected.

The 2016 June horoscope foretells that money and wealthy people will occupy the attention this month for the Virgo born. You will be extremely ambitious and make efforts to become more prosperous.

You will have the unstinted support of family members and senior colleagues. Cash flow will accumulate from career as well as projects floated by the Government. Legal issues can be sorted out towards the end of June 2016.

The June 2016 Virgo monthly astrology forecasts show that love will be sluggish this month as your love planets are not in your favor. Your charm might not work that effectively and so you will be forced to postpone decisions on love and sexual matters till the end of the month.

Single Virgins will find love in their job environment, in social gatherings or fall in love with their friend. Existing partnerships should be evaluated and necessary steps to strengthen may be undertaken. Family members can be unpredictable during the time of eclipse in the second week. You might receive some news about pregnancy amongst your well wishers.

Health will be traumatic in June 2016 for the Virgo people. You should conserve your vitality by focusing on matters of priority. Improvement in health can be expected if you make some effort to eat regular meals on time exercise every day.

To conclude, the Virgo predictions for June 2016 foretell that this is a good month to work hard and save for your future.