June 2016 Horoscope for Cancer forecasts that by end of the month psychological strength will be vital compared to career and professional aspects. Your personal objectives should have the emotional support if they have to succeed. You should review your career path and make necessary changes in your business plans.

The Cancer personality will be ambitious and ready to go any extent to reach their goals in June 2016. You are not dependent on others and by your success you can make others happy. But due to planetary retrogrades progress will be slow and obstacles are expected.

Religion and spirituality will be necessary for your triumphs in life. You may attend religious discourses to augment your intellectual and emotional capabilities. The crabs may also enhance their academic knowledge by higher studies. 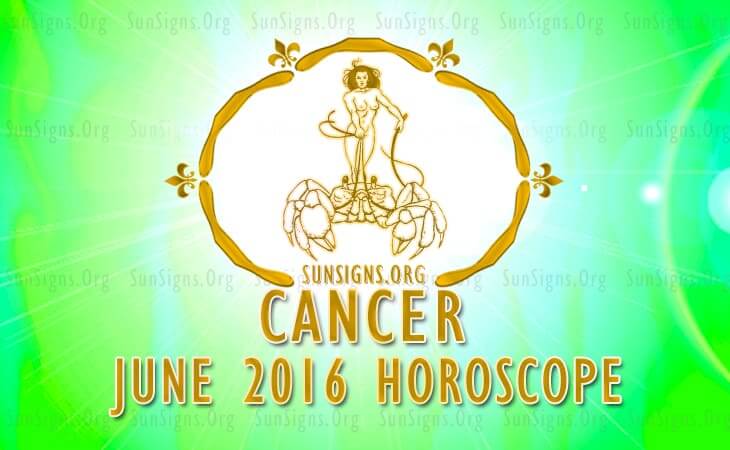 June 2016 will be a dull month when it comes to business and jobs.

Nothing much is expected to happen in your career this month.

The June 2016 Cancer monthly predictions foretell that your financial position will be superb this month. You must be prudent enough to strike a balance between income and expenses.

Money will flow from profession or through business projects. You are more forceful in pursuing your financial goals and enjoy the competition you are likely to face. Your family and your spouse will assist you in your fiscal ventures.

June 2016 will be a good month for love matters of the Cancer zodiac sign. Relationship with your spouse will be harmonious and sexually stimulating. Singles will get abundant romantic opportunities while chasing their monetary dreams. They will have a problem driving away prospective lovers.

Love will be more materialistic than emotional this month. You may find love in social gatherings while mixing with influential personalities. Marriage for single crabs are probable. Married people will spend on luxuries for their partners and for improving their personal outlook in general to be more attractive and flashy. This is also an excellent time to plan for a pregnancy.

The physical well-being of the Cancerians will be up to mark during this period. You should stick to your rigorous fitness work outs and make the most of health benefits of natural foods.

To conclude, the June 2016 Cancer horoscope forecasts that this will be a spiritually rejuvenating month when the materialistic aspects of life will take a backseat.